Ive been “on board” with the Virgin Voyages project for well over a year now and have attended many of their briefing sessions and launch party’s, listening to the hype and their ideas and thinking to myself that if they can pull off that off then Scarlet Lady is going to be a game changer. And after having been on for an overnight I can say that they have achieved what they set out to do – mostly. 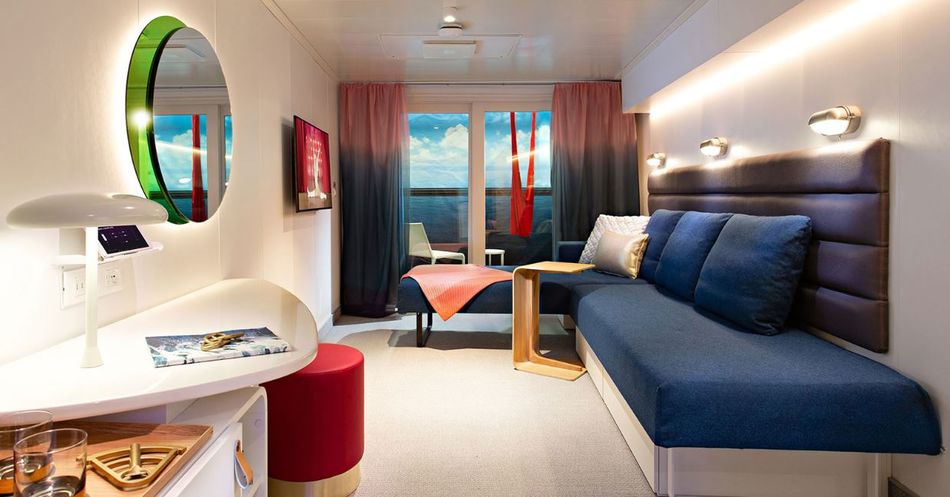 Cabins were functional, if a little basic, with an open wardrobe covered with a curtain with floor-to ceiling cube shelves too. Not a great deal of storage, but probably plenty for the 4 and 5 night itineraries the ship is offering, and as there no real dress code – no posh frocks or tuxedos needed to be hung up. The bed set up during the day is an L shape sofa, then the stewards make it up for the evening into a bed. I liked this idea and made the room more useful during the day. The bed was very comfortable and you could not feel the “join”.

No single use plastic bottles of shower gels etc but larger bottles which was good to see. The cabin also turns itself off when you leave, and even draws the curtains automatically to save on air con and electricity. The higher grade Rock Star suites were large and some of the balconies were massive - the largest I've seen - but felt a little under furnished and under-lavish for me being the top suites on board. 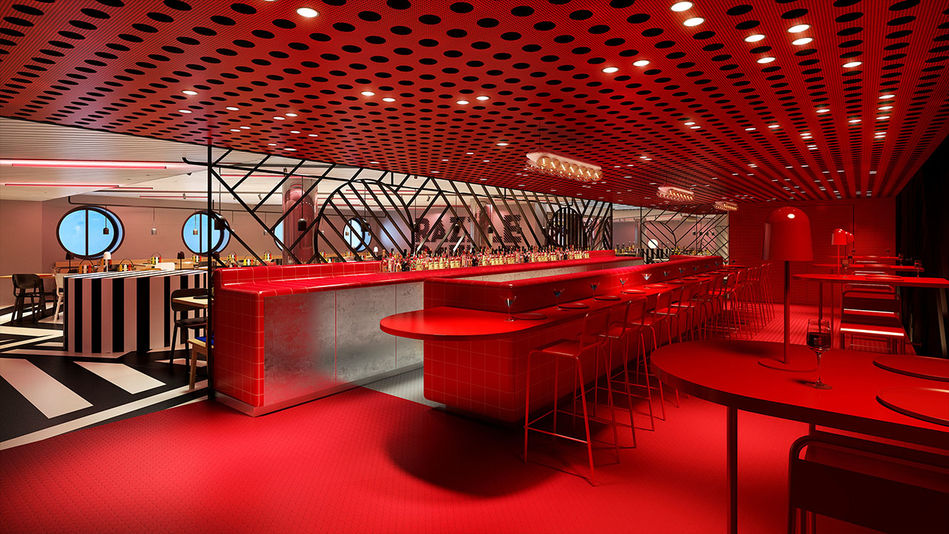 Where Virgin Voyages have really excelled at is the public rooms and restaurants on Scarlet Lady. Bars were well designed and the attention to detail was excellent – they have not scrimped on the finish at all.

All the food I tried (Razzle Dazzle, The Wake and Test Kitchen) was excellent and worthy of a six-star ship, with inventive menus too. Lots of vegan and veggie options. The photo below is from my actual meal in Test Kitchen. 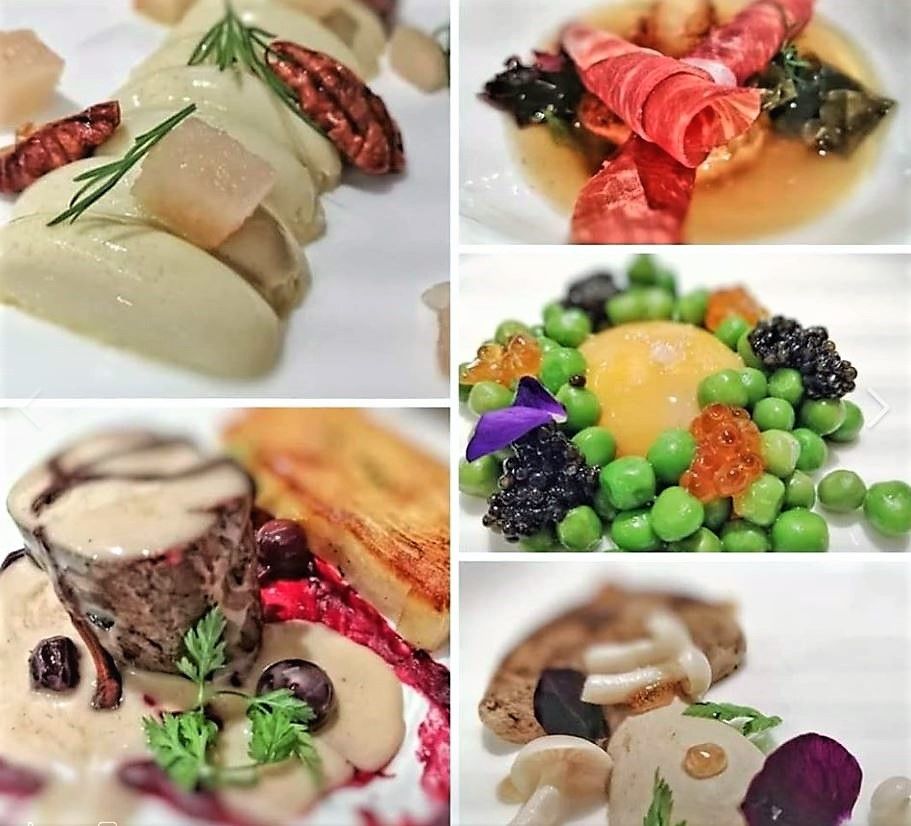 Crew and staff have all been hand-picked and not from the usual crewing agencies, so were all individual and quirky in their own way – think tattoos, hair colouring and piercings – not offensive of course but it gave them personality and they were all super genuinely friendly – from over 60 nationalities apparently. This is a real feather in Virgin Voyages cap. Some were new to cruise and others worked on other ships – but all said the way Virgin Voyages is looking after them was amazing! They have their own restaurant, free WiFi, free coffee bar, larger cabins and no hierarchy with separate officers mess - all crew dine together. 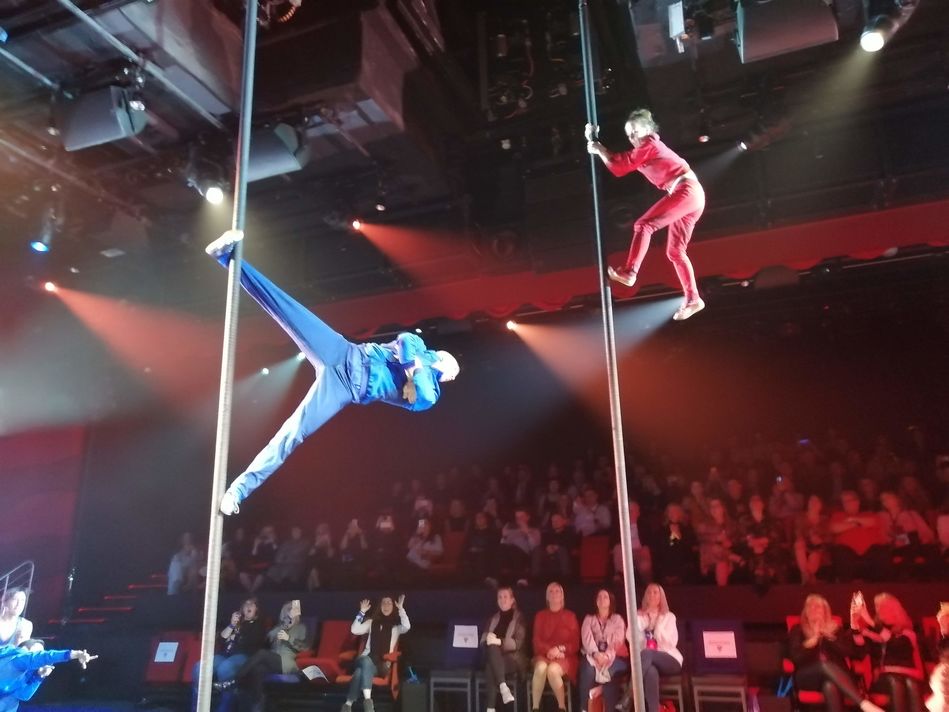 I loved the quirky entertainment, drag queens, and pop-up “happenings” around the ship. The acrobatic show and the "Untitled Dance Show Party Thing "  I’ve never seen the likes of on a ship and in my mind its long overdue. The vibe on board is very relaxed, the officers do not have stripes, there is no Cruise Director, no dress codes, no main dining room, lots of music in the bars and it's all very hip and chilled-out, and very well, "un-cruise" like.

I didn’t really get to see the outside open decks properly as the weather was so bad and they had to remove furniture as the wind was blowing too strong.

This ship is not for everyone and I'm sure Virgin Voyages make no apologies about that. Like Richard Branson said when I met him at the shipyard in Genoa, he wanted to go on a cruise but there wasn’t anything out there that he would want to travel on. It's not an age thing – more a mind-set, so he’s built this!

It will be a divisive product – most regular cruisers will not like it and it’s not for them to be honest – it's aimed a new-to-cruise market that always thought cruise was boring and stuffy, but Virgin Voyages are really shaking things up and I think in the Caribbean this ship will be great on the shorter cruises it's operating. Perfect for young at heart couples, LGBTQ travellers, singles and friends who enjoy the south beach lifestyle with fitness and healthy food options thrown in, but who enjoy good food and a party lifestyle in the evening.

Have they got it all right? I'm sure time will tell and as the ship beds-in to her regular run I'm sure tweaks and changes will happen – like all new launches – but I think they’ve made a great start.

It will shake up the cruise industry and maybe this is what’s needed to get cruising to appeal to a wider audience. Personally I loved it and would cruise on her for sure for my own holiday.

Heading north on a #cruise? Read our guide to the Baltic Cities  https://t.co/qRT0PV07tw  #CruiseBaltic… https://t.co/DSh8G3XLAc
1 week ago

Seabourn Encore #cruise #ship #review https://t.co/lF4qo6hSVl What were the Seabourn Moments on this cruise?… https://t.co/tD3nBfr2Y3
2 weeks ago

With so many #expedition ships on order, there's going to be a lot of vessels in #Antarctica. But when is the best… https://t.co/T86aV527xJ
2 weeks ago