The Greg Mortimer is Christened in Ushuaia

After a year and a half in the making, Aurora Expeditions Greg Mortimer has arrived in Ushuaia, Argentina.

The revolutionary ship was christened by Aurora Expeditions co-founder and Godmother, Margaret Mortimer, and rather than smashing a bottle of champagne against the hull, a large block of Antarctic ice was used, with Mortimer saying "I name this ship, Greg Mortimer. May God bless her and all who sail in her". Also in attendance was Margaret's husband, explorer and co-founder of Aurora Expeditions, Greg Mortimer, who the ship is named after.

Margaret Mortimer said: “It never crossed my mind that I would one day be Godmother to a ship named after my husband. I am so proud to be launching his namesake and pay tribute to all those hard-working people who have made this ship a reality. For future expeditioners, I hope you enjoy many hours of life changing moments on board the Greg Mortimer.”

As a modern and custom-designed ship, the Greg Mortimer is at the cutting edge of nautical technology. Robust, powerful and built with guests in mind, this ship marks a significant investment in Aurora Expeditions fleet's capabilities. 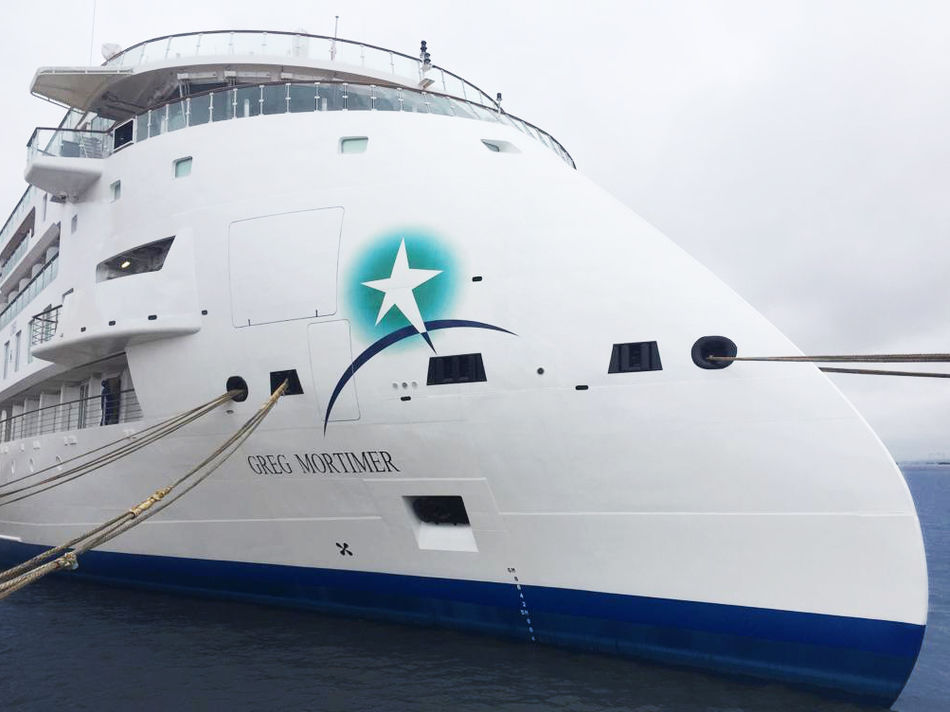 Aurora Expeditions voyages face some of the worst Mother Nature can throw at them. However, this won't be problem on the Greg Mortimer with the introduction of the patented X-BOW™, created by Norwegian ship designer ULSTEIN. As one of the leaders in marine engineering, ULSTEIN's X-BOW™ is an inverted bow concept that's been built on over 100 vessels in the shipping industry. Excitingly, Aurora Expeditions are the first expedition cruise operator to utilise this technology for the challenging open ocean waves.

Summary of the technical benefits of the X-BOW® on the Greg Mortimer:

The main advantage of the ULSTEIN X-BOW® is that it can pierce waves with more stability than a traditional ship bow. Instead of simply rising on the waves and then dropping with tremendous force, the X-BOW® is able to absorb the force more consistency across its surface – enabling the ship to remain more stable during poor weather conditions, increasing comfort for passengers and crew alike.

The new ship features unique viewing platforms, custom-built for the Greg Mortimer. Accessed from Deck 5, the two platforms fold out hydraulically for unobstructed views of passing marine life and seabirds.

Zodiacs are a vital part of getting up close and personal on your adventure. On the Greg Mortimer, there are specially designed launching platforms that enables the crew to load Zodiacs easily and quickly, allowing you to spend more time exploring on the two to three daily landings. There are 15 Zodiacs that are boarded from either side of Deck 3 (sea level)

Regardless of your destination, Aurora Expeditions offer a number of additional activities to allow you to see more of the environment. From kayaking and diving to climbing and ski touring, it's these optional activities that often leave the biggest impression on your trip as a whole. Onboard the Greg Mortimer, there is a spacious prep and loading platform for these activities and more – designed in consultation with Aurora Expeditions expert activity guides.

This Fly/Sail itinerary features the best of Antarctica and allows for more exploration, with no crossing of the Drake Passage. Get up close with iridescent icebergs, vast colonies of Adelie and gentoo penguins, as well as islands that are alive with leopard seals busy with courtship.

Famed for its abandoned whaling stations and Shackleton’s heroic journey, South Georgia is home to millions of fur seals and penguins, wallows of elephant seals, and nesting albatross

Highlights include
At Sea • Antarctic Peninsula • At Sea • Ushuaia

Read our first-look luxury cruise #review on Seabourn Ovation! What did I think of The Retreat? … https://t.co/ZNeOSo1hgC
5 hours ago