In amongst this all, Concerts for BBC including "Friday Night Is Music Night", ITVs "Pot Of Gold" with Des O Connor, "Stars In Their Eyes" with Cat Deeley, support act for Grumbleweeds, The Wurzels, Freddie & The Dreamers, Bucks Fizz, Phil Cool and many others. A performance for Her Majesty The Queen & The Duke Of Edinburgh at The Royal Albert Hall. 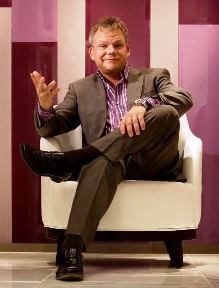 When/how did you get into entertainment?

I had a friend who was an entertainments manager at Pontins & helped out for a week one summer when I was 14. I loved it and started working towards getting as many skills for doing that job & career when I left school. As well as improving my skills on Trumpet, Ukulele and Piano, I learned to Ballroom Dance, Tap Dance, balloon modelling, a little close up magic but never got the hang of juggling!

I started at Pontins, as a holiday host where I compered competitions, called bingo and performed in shows.

When I saw the cabaret do their 45 minute show for three times what I was getting a week, I thought....."I want to do that!!!"

Which cruise lines have you been a guest entertainer on?

What do you like best about working on ships?

How do you like to spend your days on board?

I’m always busy! I like to make the most of the destinations even if ive been there many times. I also use the time to develop material and write musical arrangements for my shows.

Funniest thing that has happened to you on board?

On a tour from QE2 in Gibraltar. On the rock they have Barbary Apes and you must not touch them, but what do you do if the apes touch you? I had a big monkey sat on my shoulder for the best part of half an hour and wouldn’t move! People thought I was part of the tour offering to give me money to have their photo taken with me.

Most embarrassing thing that has happened on board?

Missing the ship!In the USA, I luckily had a pilot boat to take me back or it would have been 2 days before rejoining, missing my own show in the process. the pilot boat took me the 6 miles out to meet the ship... The arrival was filmed and shown on the farewell night to howls of laughter from the audience

Favourite port of call and why?

Difficult one, Santorini for the dramatic position on the cliff tops & romantic sun drenched terraces with fabulous views, a place to share a glass of wine & make memories

What would you do if you were not in the entertainment business?

I’d still like to be involved in travel or to do something important. Maybe a surgeon probably because I like hospital drama TV shows too much, an airline pilot possible because of the uniform but maybe international billionaire playboy might just do it.

How long are your contracts on the ships?

I’m usually away for 7 - 10 days however over the winter months I may do 4 weeks back to back moving between different lines in the same part of the world like Australia or New Zealand. Certainly cuts down the amount of flights and time travelling and may reduce my carbon foot print down from the size of a snow shoe!