So we awoke and opened the curtains to reveal a very grey and drab day. No tours booked today so we jumped on the shuttle bus that dropped us off in the town centre. Tromso city is the largest city and urban area in Northern Norway, and the second largest city north of the Arctic Circle. Most of Tromso, including the city centre, is located on the small island of Tromsoya in the county of Troms, around 217 miles north of the Arctic Circle. 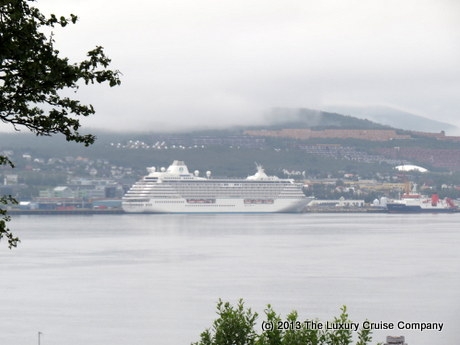 Tromsoya is connected to the mainland by the Tromso Bridge and the Tromsoysund Tunnel. The city is warmer than most other places located on the same latitude, due to the warming effects of the Gulf Stream. Major attractions here include a botanical garden, the Arctic Cathedral, The Polar Museum, the Contemporary Arts Museum and a cable car that takes visitors 1,382 feet to the summit of Mount Storsteinen. 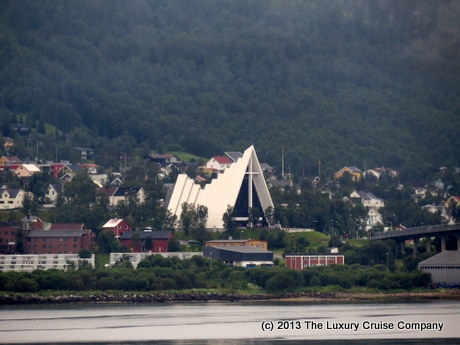 We walked across the Tromso Bridge and visited the famous Arctic Cathedral. This cathedral was built in 1965 and is very modern inside and out, and is in fact a church! It is one of the most famous landmarks in Tromso and is constructed mainly of concrete. 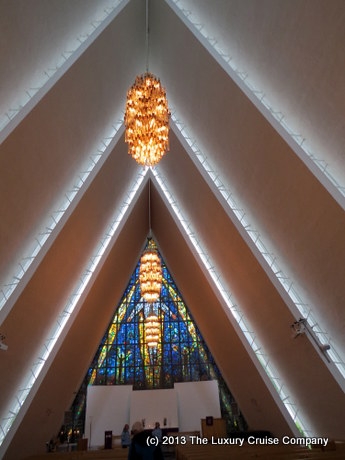 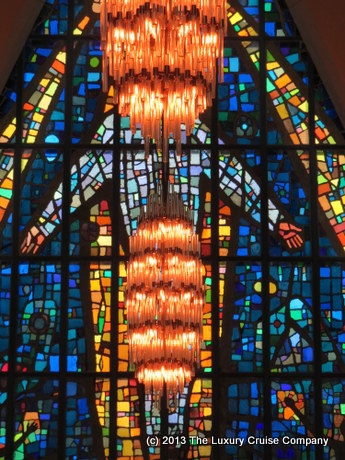 After a visit here and 40 Kroner later, we walked back along the bridge and walked around the town. There is a lovely pedestrianized area called Storgata with lots of local shops and restaurants, plus a few well known chain stores. 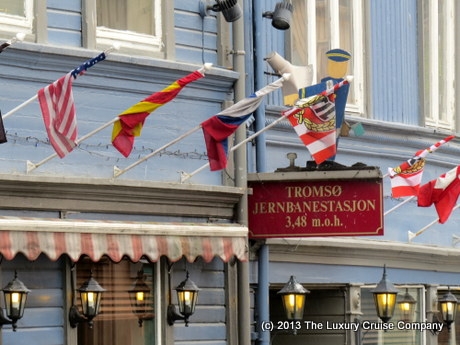 By lunchtime we had seen enough and we joined the complimentary shuttle bus back to the ship in time for lunch on the pool deck. The Trident Bar offers a great selection of lunch time treats from the Tastes menu, including pizza, noodles, quesadilla, salads, soups, and sandwiches. Of course the Trident grill is always available for burgers, fries, hot dogs and wraps. This is a nice area as it is under the retractable roof, so great for this current overcast, chilly and drizzly weather. There is a pool here too, but I’ve never seen anyone it! The ship is going into dry dock at the end of the year, and this area will be refurbished and the pool removed.

The entertainment for the evening was Liars Club (like the ’Would I Lie To You’ TV show for UK readers), a game-show panel style of quiz, that was very amusing. The cruise staff gave out little electronic voting gadgets, and encouraged us to get into teams. Basically each member of the panel gave a description to a word, and the audience had to guess who was telling the truth. The panel consisted of two of the guest lecturers, the magician from the Magic Castle at Sea and the guest comedian. A very entertaining show!

Then it was into the main dining room for a Russian themed dinner. All the waiters were wearing Russian smocks and the tables were decorated with charger plates depicting Russian scenes We ordered the, borsch and a chicken Kiev, have to say it was rather disappointing. Even the shot of ice cold vodka couldn’t fix it! A quick catch up with new made friends in Crystal Cove and a cocktail or two then it was off to bed, 8:00 am start tomorrow!