So today Crystal Serenity arrived in Honningsvag, port for the North Cape and we have booked the Crystal Adventures tour to take us there. After a delicious Eggs Benedict breakfast, we disembarked at 9:15 and jumped on the tour bus. The weather here is very changeable and we went from rain and wind to sunshine in a matter of minutes. 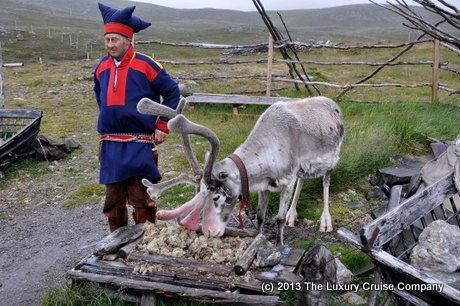 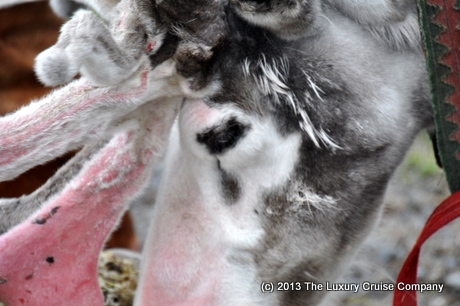 On the drive to North Cape we stopped off at a Saami hut and handicrafts store, and met a local Saami wearing traditional costume feeding his reindeer. We also saw lots of wild reindeer roaming free on the hills, much to the delight of the bus passengers! 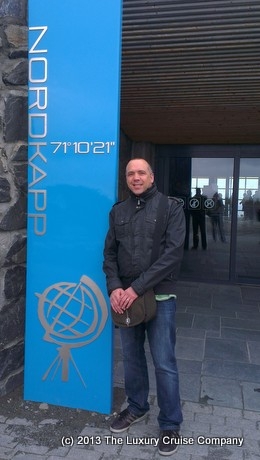 We arrived at The North Cape and the weather had turned very gloomy and windy, but thankfully dry. The North Cape is a 1,000 foot high cliff and referred to as the northern most point of Europe. Known locally as Nordkapp, Norway’s North Cape hovers around the 71 degree north latitude line, further north than most travellers have ever ventured. The Nordkapp is a highly prized destination and presents a true travellers challenge, as it’s a bit difficult to reach and very much off the beaten path. The government plans to complete a five-mile long underwater tunnel linking Mageroy island to the main land, but until then the easiest way to get there is by cruise ship. There is a visitors centre there, consisting of gift shop, restaurant, post office and a cinematic presentation about the Cape, Midnight sun and northern lights. 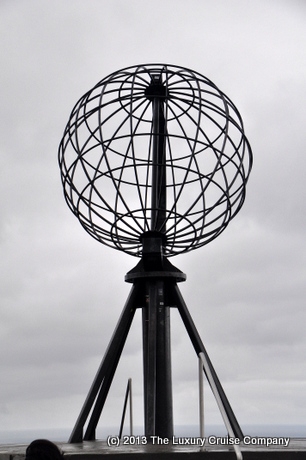 At the very tip of the cape is a metal globe sculpture that’s a popular place to have your photo taken, even in the cold wind like we had! 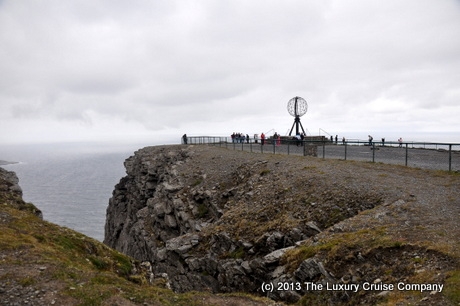 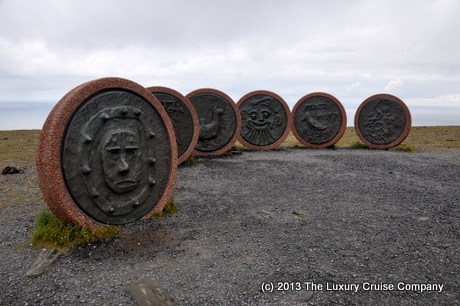 There is also a series of disk-like sculptures created by seven school children from seven different countries, each child between the ages of eight and twelve. These disks were erected to praise the children of the world. Nearby, Eva Rybakken’s touching sculpture, Mother and Child, seems to be watching over them. 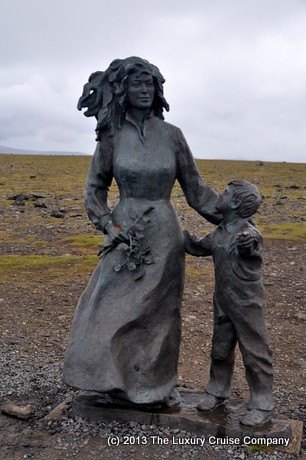 Plenty of time here to allow you to explore then it was back on the bus and back to Honningsvag. The ships tour cost $165 pp, however you can take a local bus for KON 450 pp which takes you there if you want to do it independently (about $45).

After lunch we wandered around the small town of Honningsvag. The village is quite charming, with about 5,000 inhabitants, with some 4,000 fishing boats passing through annually. The old wooden church was one of the few buildings remaining after WWII, and was built in 1884. Whilst we were there a Hurtigruten ship was in, and a ferry from another Scandinavian country - so a popular port. 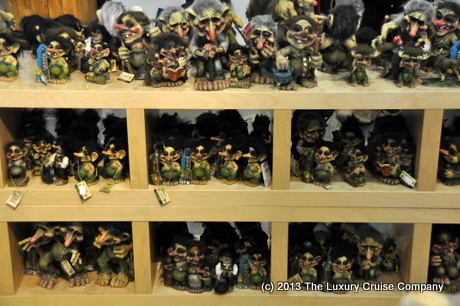 There is the North Cape Museum here, showing permanent exhibitions on various aspects of local history, wildlife, culture and the environment. There is also a large gift shop selling all things Norwegian like troll dolls and things made from reindeer fur!

The evening meal was a grand buffet displayed in the main lobby, (the Crystal Plaza), so we decided to dine "in suite" with dishes served by our butler, course by course, from Prego and Silk Road. Whilst we were dining, the ship sailed passed the North Cape and we had a great view of this rocky peninsula emerging from the low cloud and fog.