Today’s weather was very overcast, with frequent rain showers, mist and heavy seas, so no one was out on the open decks!

This cruise is a Crystal Cruises Wine and Food Festival theme cruise, and this morning celebrity chef Marc Cummings was holding a cooking demonstration in Crystal Cove.

Marc was a rising USA tennis star when his father insisted he get a four-year degree so he would have a college education when his professional tennis career ended. It was then that Marc chose to go to cooking school where he was trained and certified as a Master Chef at the prestigious Cordon Bleu in Paris. He then became Executive Chef for the world renowned Club Med resorts in Tahiti. Marc ventured into successfully opening his own restaurant, Ole LA, in Beverly Hills and Brentwood, California and soon after, had his own national cable TV show called The Very Best of Everything with Marc Cummings. 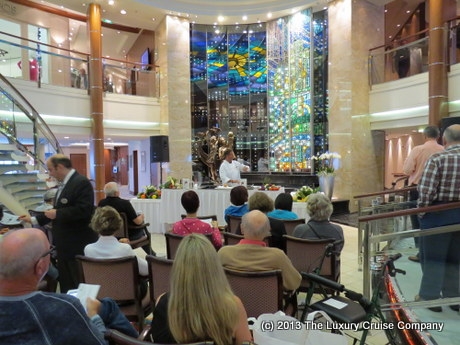 The ships staff had set up chairs in Crystal Cove, and a demo table in front of the lovely water feature in the atrium. It was pretty packed, obviously a popular event, and staff handed out recipe cards so you didn’t have to write it down. Today’s dish was crab cakes with roulade sauce and arugula salad. They also held a draw for the people to have a private cooking lesson with the chef later in the day in the galley. The event was good, however a bit tricky to see- a video camera on the work area feeding to a tv screen would have helped.

Today was scenic cruising, and we headed into a fjord to see the Svartisen Glacier. It came into view around 11.30 am, however the weather was not great and even though we could see the glacier, it was kind of misty. It was still very impressive however, very large and translucent blue in colour - would have been amazing on a sunny day! 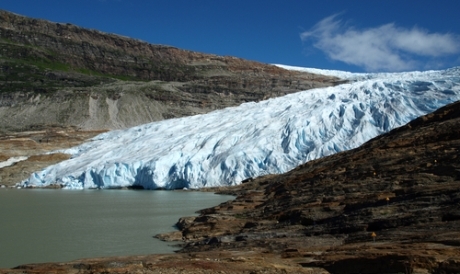 Svartisen Glacier - on a sunny day!

After lunch we crossed the Arctic Circle, marked by a globe statue on one of the many nearby islands that scatter the Norwegian Sea. So now we were in the land of the midnight sun! If only we could see the sun!

The show was a pre-dinner show and featured humourist and musical entertainer Jimmy Travis. Jimmy has made over 50 TV appearances and is a repeat performer in the main showrooms of Las Vegas, Reno and Lake Tahoe. He has also written advertising jingles for Toyota and many others. I had reservations to start with, as some America comics on cruise ships tend to focus their humour and jokes on American culture, however Jimmy was extremely witty and catered well to the international crowd on board - there were some real laugh-out-loud moments!.

Dinner tonight was in Prego, the other alternative restaurant on board Crystal Serenity featuring Italian cuisine, and was delicious, in fact the best meal we have had on board so far! I started with the Ahi Tuna, followed by the signature mushroom soup served in a hollowed out bread bowl. For main course I had the lasagne, followed by the Limoncello soufflé. Really enjoyed the whole dining experience and will definitely book to dine here again. 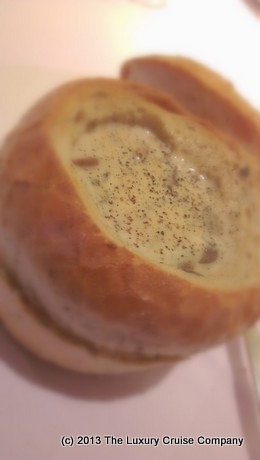 We headed off to Pulse as it was karaoke night. It was actually quite busy and we met up with some new found friends we made earlier in the day and enjoyed the other guests singing efforts - some better than others it has to be said!

Clocks went forward an hour so it was off to bed at 2am.

The sun never sets so it’s light even at this time, which felt a bit weird going to bed in full daylight!