Very excited to be in the fjords today and woke up early to see the ship arrive into Hellesylt, our first port of call. We are dropping off pax that are participating in one of the tours at Hellesylt, and then Crystal Serenity is moving to Geiranger. In the Viking era, Hellesylt was an important Norwegian port, full of merchants sailing to the Baltic, England, France and other northern European destinations. Today it’s a very small, quant and charming village. 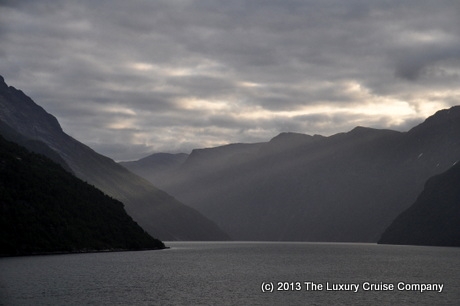 On our way to Hellesylt

The passengers boarded the tender for their 8-hour tours, taking them up into the mountains and then dropping them off at Geiranger, where they will meet the ship later. 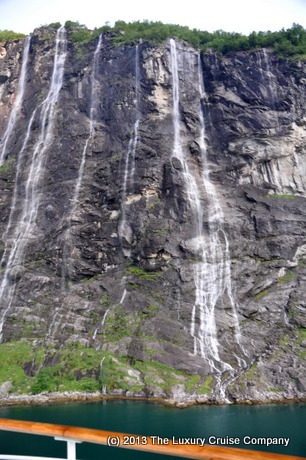 As the ship sailed towards the village of Geiranger, we passed many small waterfalls, with the most spectacular being the famous Seven Sisters waterfall. The captain made some commentary over the ships PA system that added to our understanding of the local area, and being Norwegian he had a particularly good insight into the life up here. After meeting in the main show lounge, our tour was ready to disembark "A Lingering look at Geirangerfjord " and we proceeded down to the tender area. 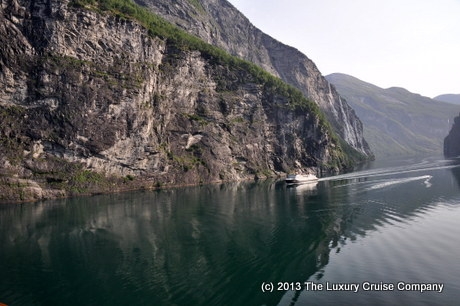 Geiranger village is located along the picturesque snow-capped Geirangerfjord in central Norway. One of the most spectacular of all Norwegian fjords, Geiranger has been visited by touring ships for more than 100 years. Impressive mountains, numerous waterfalls and farms clinging to the steep hillside combine to give this area its unique character.

How much are the tours on Crystal Cruises?

Our tour cost $244 per person for 6 hours. A selection of other tours available:-

Some tours left in the afternoon which was nice for those that did not want an early start.

We were quickly ashore (Crystal Serenity had bagged the best spot, despite another ship being in before us) and we soon boarded our bus. The tour left the small village of Geiranger and climbed up the mountain via a series of hair pin bends to our first stop, the Flydalsjuvet Viewpoint. Luckily the weather was much better and even though a bit cloudy the sun was trying to peek through. We had a great view of the fjord and the ship and it was perfect photo opportunity. 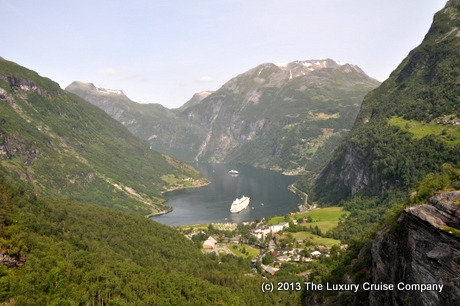 The areas below the tree line were very green and covered in trees, lichen and grass, whilst the tops of the mountains were still covered in snow. Apparently there are plenty of wild reindeers, but we didn’t see any as they are higher up the mountains at this time of year. 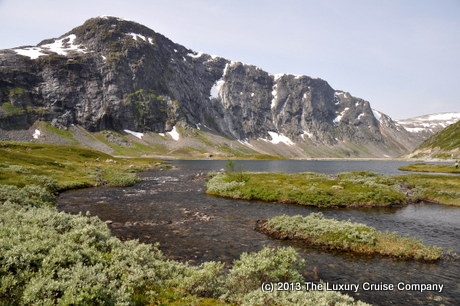 After driving through the Flydal Valley, our next stop, Djupvatn Lake, was higher up and the trees had started to thin out, and the terrain was far more rocky, with high jagged mountain ridges reflected in the fresh water lakes that were created from the glacier melt waters. It was surprisingly mild even at this height, so jackets were not really needed, however for some of our fellow guests from Florida, it was freezing for them! Back on the coach and we climbed even higher, eventually arriving at the Tystigen Glacier, a popular summer skiing area. By now it was getting a bit chilly, time to break out the coats! This was a picturesque area, with vast lakes reflecting back a lovely blue hue colour. 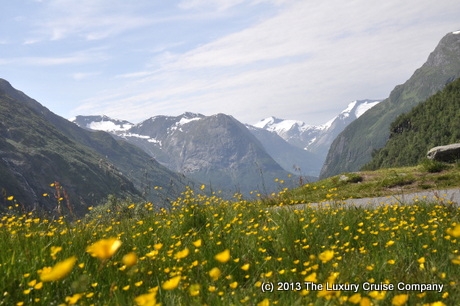 Back on the coach and we enjoyed our scenic drive to Videseter for lunch. This hotel sits high on the Videdalen Valley with a stunning view of the valley below ,and as the sun was trying to come out made for another great photo opportunity. Lunch was very Norwegian, a prawn cocktail starter followed by salmon in a butter sauce. Dessert was crème caramel. The hotel was situated next to a thunderous waterfall and summer meadow and made for wonderful views. 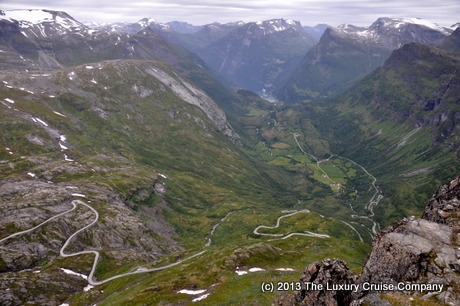 Back on the coach for our last stop before returning to the ship - Mount Dalsnibba. This view point offered spectacular views down the fjord to where the cruise ships were anchored, plus views of the hairpin roads and lush green valley below. 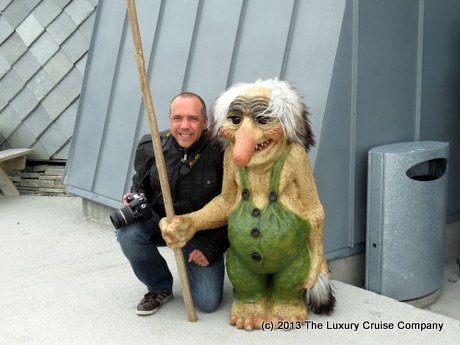 After we were dropped off at Geiranger, there was time to explore or you could jump on a tender and head back to the ship. Back on board we were served hot chocolate with rum or a drink called Glogg, which was like mulled wine or Gluhwein, and the ship set sail, back past the Seven Sisters waterfall and out to the open sea. The tour was excellent, the guide very good and we had a brilliant day.

Tonight’s entertainment was by guest entertainer pianist David Schofield, however we did not have time to see him, but he was by all accounts excellent.