We were hoping for some stunning weather for Alesund, however, it was not great - cold and rainy yet again! Our new best friends Larry and Martin were disembarking Crystal Serenity today so after a farewell breakfast we headed to the gangway for a quick look around the town with them. 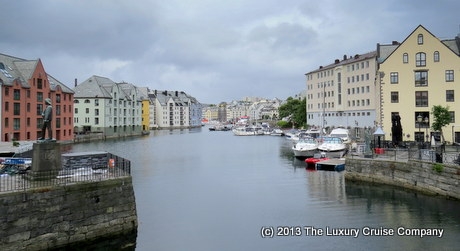 Alesund is often described as "charming and eccentric" due to its unusual architecture. The town centre boasts a collection of Art Nouveau buildings, many with turrets and towers, which are not so unusual, except for the flourishes of human faces, pharaohs, and dragons that peer down upon passers-by. Alesund can also be described as spectacularly beautiful, with its quant harbour, serene islands, snow-tipped peaks, dramatic fjords and lush valleys- the area is a haven for bird watchers and anyone who appreciates the delight of waterfalls and out-of-the-way hamlets.

Alesund occupies seven of the outer islands in the county of More og Romsdal, and is situated 236 km northeast of Bergen. It is adjacent to the Hjorund and Geiranger fjords, the latter being on UNESCO’s list of World heritage Sites. 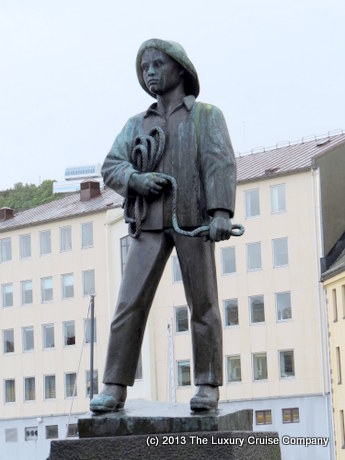 Major attractions here include the Apoteker Square, which is located at the end of the Brosundet canal. At the centre of the square is the Skarungen, a statue also known as "The Fisher Boy", a bronze figure that symbolise the optimism of youth in the future. Also in this area is the pharmacy building, which gave the square its name as it was the first Art Nouveau building in Alesund. 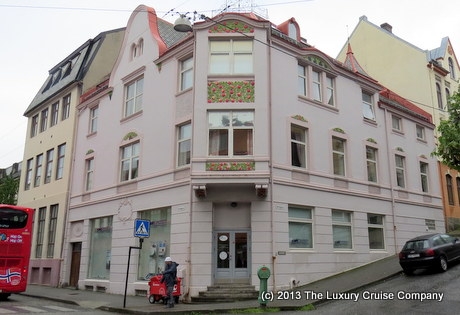 Other attractions here include the Art Nouveau Centre, which documents the towns re-building after the Great Town Fire of 1904, the Atlantic Sea Park (one of Scandinavia’s largest aquariums), the Alesund Museum, and the view from Mt Aksla. 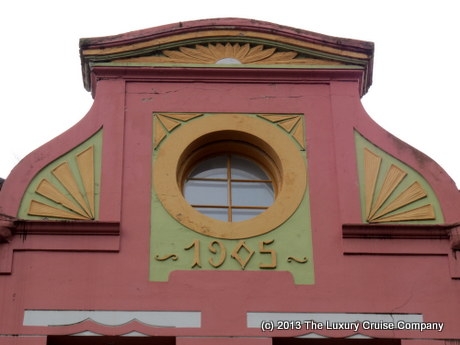 The buildings were indeed very pretty, and this is a delightful port - probably looks much better in the sunshine! I really wanted to go up to the viewpoint to get a great view of the town, but the cold, damp and cloudy weather put paid to that idea! After a few photos and a mooch about we headed back to the ship for lunch with Larry and Martin and bid them farewell. That afternoon we headed to the local library or Bibliotek as we had heard there was fast free wi if available! So our afternoon was spent logging on to our iPads and checking Twitter, Facebook and our emails! It was still raining when we left, so back to the ship!

That evening, they performed the previous night’s show that was cancelled due to the bad weather. It was called Across the Pond - a medley of songs from the USA and UK, performed by the Crystal Singers and Dancers - think the Rolling Stones, Beatles, Billy Joel, Queen etc . It was not that great to be honest, badly directed with some odd song choices. Still the ships dancers did a good job, even if the main singers sang the pop songs in a show tune style. The audience seemed to like it and they gave the performers a standing ovation, so what do I know eh? After that, we headed to pulse nightclub for karaoke and a nightcap.