Celebrity Cruises have announced details of the entertainment offering on board its new cruise ship Celebrity Edge, set to be just as revolutionary and carefully crafted as the ship itself.

On Celebrity Edge, guests will experience the most technologically advanced main theater, the most production shows of any ship in the cruise lines history, the largest cast of world-class performers on any premium cruise ship, and more entertainment venues than ever before. 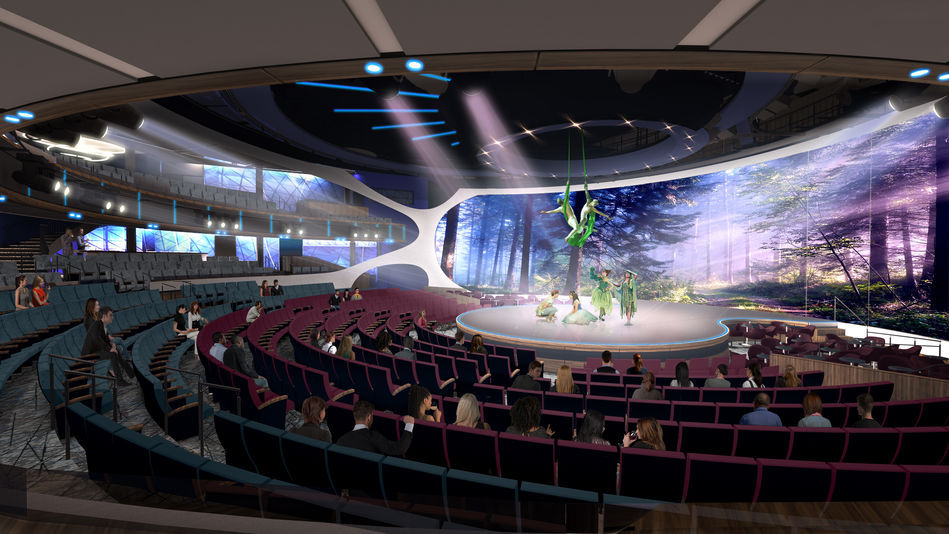 The innovative Theatre on Celebrity Edge

The Theatre on Celebrity Edge

The Theatre on Celebrity Edge throws away the curtain altogether, blurring the line between audience and performance and immersing guests in an entertainment experience like no other. With four stage areas and three gigantic, moving projection screens, The Theatre offers an ever-changing canvas for the production shows. The main stage extends into the audience creating a theater-in-the-round sensation. A duo-directional rotating platform raises almost seven feet above the stage to take performances to a whole new level. With two rotating spiral staircases, 10 synchronized panoramic projection screens, 16 state-of-the-art video mapping laser projectors, aerial performance rigging, and more, the technology behind the scenes will at times steal the show.

The productions in The Theatre will wow audiences of all ages. In fact, for Celebrity Edge,  Celebrity Cruises have created five full production shows. including:

Immersed in a light-heartened journey that fuses music with extraordinary acrobatics. A tale of love, intoxication and midnight madness inspired by Shakespeare.

Jaw-dropping technology and evocative acts merge to create and entertainment experience that will keep you talking long after the stage lights go down.

A high-energy music and dance extravaganza that utilities revolutionary LED screens, 18 synchronized projectors and state-of-the-art technology to take performance to another level.

An uplifting production designed to celebrate the inner self. 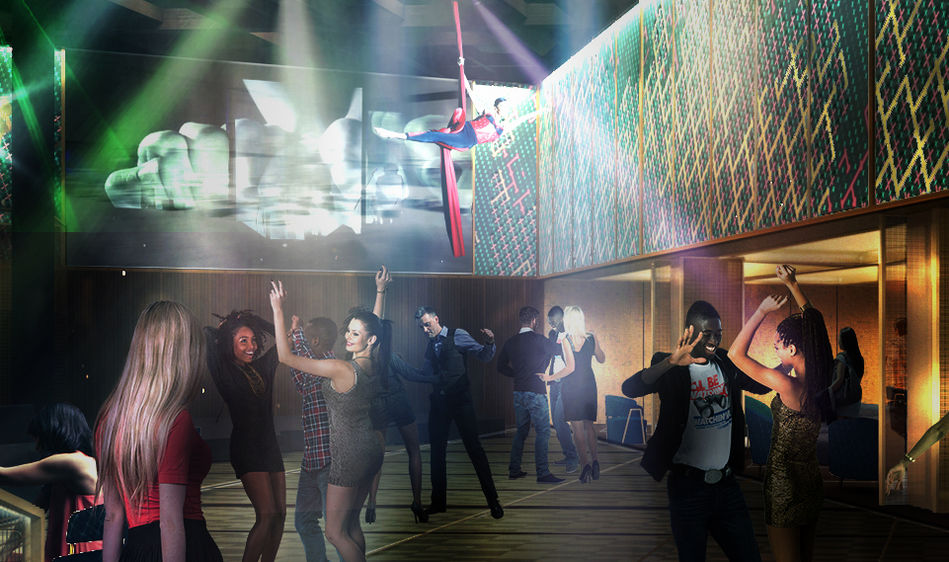 The Club on Celebrity Edge

The Club on Celebrity Edge

Gathering space by day and a place of wild discovery by night—Celebrity Edge’s transformative venue will have you coming back for more. Experience everything from gaming and live DJ performances in this dynamic, multi-purpose space. Watch from the bar. Jump into the action. From sunrise to sunset, unexpected and engaging moments await at The Club.

The Club on Celebrity Edge is a progressive space that changes its persona from morning to... well, early the next morning. During the day, The Club offers experiences such as the Funovation Laser Maze Challenge, the Drone Hunting laser obstacle course, and more.

At night, The Club undergoes yet another transformation. Undercover at The Club puts a contemporary spin on the Prohibition era with 20’s-inspired craft cocktails and an aerial saxophonist. The futuristic body scanner of Andromeda allows guests to become someone else for the evening. And Celebrity’s Hypno Cam Experience is a first-at-sea dance party featuring a high-tech camera that’s passed around to capture photos, which are instantly displayed on a giant LED screen. 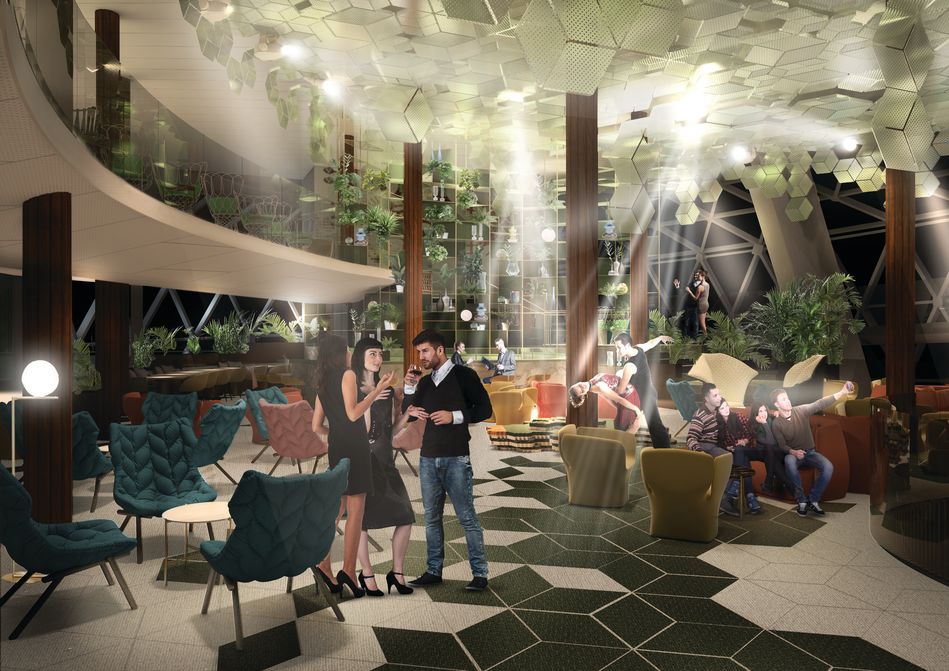 Eve at Eden on Celebrity Edge

Eden delivers a transformative experience that just as organically blends nature with design as it does culinary and performance art. It's a fusion that creates a delightfully expected array of immersive experiences. Not matter what time of day or night, a visit to Eden will awaken every sense - taste, sight, sound, smell, and touch. The iconic Eden will feature evolving entertainment as the space transforms from a “chillful” escape in the mornings to “playful” in the afternoons to “sinful” at night. Daytime experiences include Meditation at Eden and performances from sitar players to aerialists. As dusk falls, Eve at Eden begins. Developed in partnership with Variety Worldwide, this theatrical journey will indulge every sense and put guests at the centre of the experience, for a fusion of culinary exploration, performance art and nightlife – like nothing else at sea, or even on land. 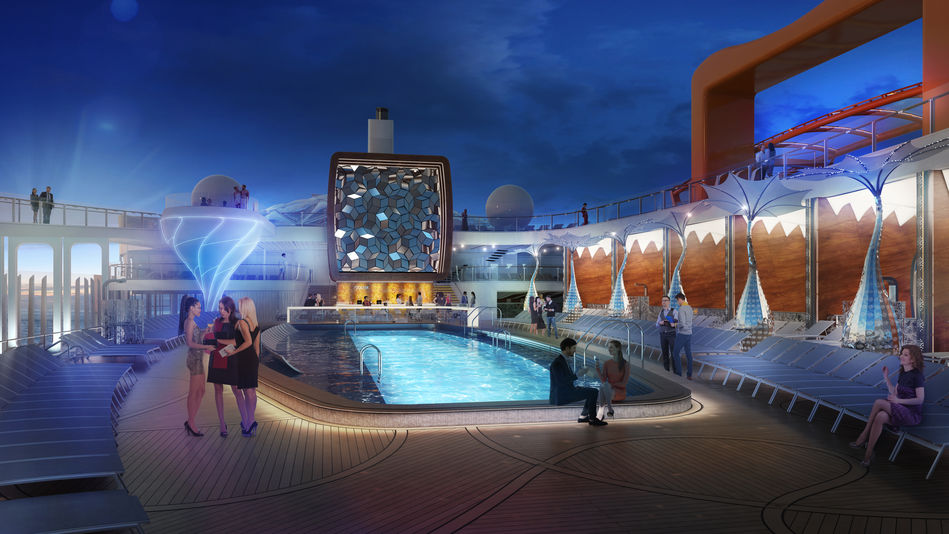 The Resort Deck on Celebrity Edge

A venue unlike any other outdoor space on board—or beyond. Connect with the sea from this multi-functional paradise that merges modern luxury with cool innovation. Escape to the Rooftop Garden for a moment of serenity. Gaze out at the open ocean from a private cabana. Indulge in interactive dining experiences and live musical performances. On the Resort Deck, there are endless ways to be entertained. Guests can enjoy experiences such as the Rooftop Concert Series and the Garden Cinema Series, the next evolution of Celebrity Cruises Taste of Film experience that’s an under-the-stars movie going experience with live musical performances. 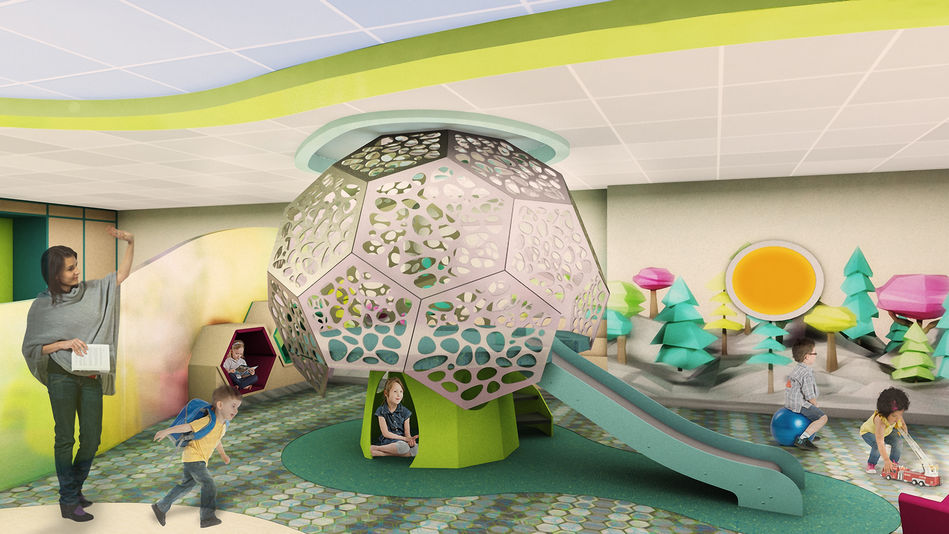 Camp at Sea on Celebrity Edge

On Celebrity Edge, the Camp at Sea program is taken to the next level for younger travellers of all ages including Celebrity’s first youth coding experience at sea, and two completely separate contemporary spaces, one for the kids and one for the teens offering next level fun for young seafaring travellers of all ages. Every sailing brings a brand new adventure full of interactive experiences and amazing learning opportunities. Celebrity’s first and only fully customisable Camp at Sea program offers a robust selection of 500 activities, including the largest Xbox One X experience at sea, and enriching daily programming at some of the most unique contemporary spaces aboard Celebrity Edge.