This morning we were up early again to be out of deck when crossing the Arctic Circle. The Arctic Circle is one of the five major circles of latitude that mark maps of the earth. When crossing this point Hurtigruten staff marked the occasion by handing out little shot glasses of cod liver oil. After this brief ceremony we headed down to breakfast. 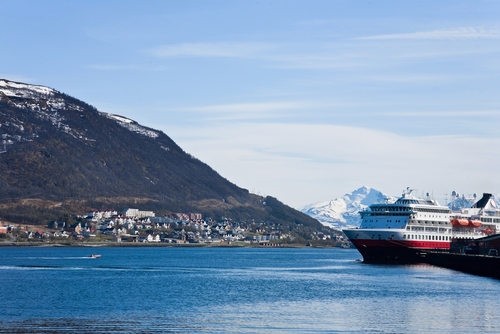 After breakfast I attended a seminar held by the tour leaders escorting my trip. This was an opportunity to learn more about Hurtigruten and the current promotions they have. As Hurtigruten are celebrating 120 years of coastal voyaging this year, they have a variety of savings and additional benefits on offer.

The coastline between Bergen and Kirkenes is over 2,400km long, and in the 19th Century almost all of it was home to rich fishing grounds. The maritime maps were unreliable and there were only a few lighthouses, especially in the north. This important seaway was lined with perilous reefs, small islands and narrow inlets, and it was essential that a safe trade route be established to link the southern and northern regions of Norway .

When the Norwegian government decided to create a connection between the north and the south, Richard With and his friend Anders Holthe took on the challenge of thoroughly mapping the seas along the coastline. In 1893, Captain Richard With’s steamer, DS Vesteraalen, was brought into regular service along the coast of Norway, and Hurtigruten was established. The service offered several weekly departures, first from Trondheim to Hammerfest and later from Bergen to Kirkenes in only seven days. He called this important connection ’Hurtigruten’ (the fast route). 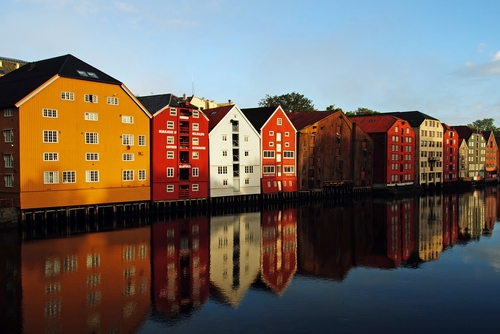 120 years later, they still carry freight and passengers. Hurtigrutens captains use their extensive maritime expertise to ensure that guests and goods are safely carried from port to port. Today, as then, the Hurtigruten ships are a part of Norwegian coastal life. One of the fleet’s 11 ships departs Bergen daily, sailing to Kirkenes and back in 12 days at an average speed of 15 knots. 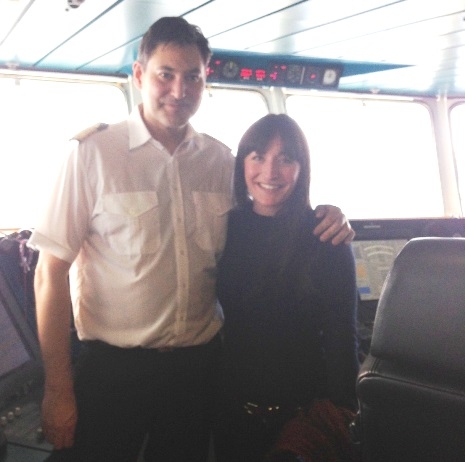 After the seminar I was lucky enough to visit the Bridge and meet our captain. He was very nice, welcoming, and more than happy to show us around ’his office’. We were only up here briefly as we were looking over the Grand Suite before lunch. As the door opened into the suite I was surprised by the huge bay window at the end of the suite, light was pouring in which gave it a really open, airy feel. In the suite you have a good amount of storage space, queen bed, large seating area, TV, stereo, internet access, mini bar and huge bay window. The en suite has a bath tub with shower over it. Some of the suites have a balcony instead of the bay window. The overall size of the suite is 35 - 37 m2. 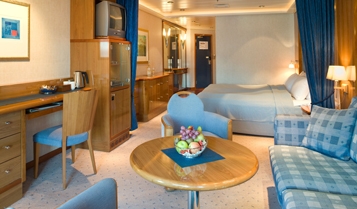 The ship has a comfortable interior, with an extensive use of Norwegian wood and stone. MS Trollfjord’s maiden voyage was in 2002 and is one of the newest ships in the Hurtigruten fleet. Being MS Midnatsol’s sister ship, they share many of the same characteristics, such as the beautiful panorama lounge and suites.

Once we’d finished looking around the suite we made our way to the restaurant for lunch. As we had the afternoon to relax we took our time over this. I made use of the complimentary wifi this afternoon and sent some of my photos back to the office. My group and I sat in the Fjord Bar chatting and taking in the scenery as it past. This evening we had the delicious set menu in the Saga Restaurant, for starters it was smoked salmon, beef steak for main, followed by a sponge and ice cream pudding.

This evening our luck was in as the Northern Lights were out again. They were fairly similar to last nights, but possibly a little bit brighter! A large number of guests were out on deck capturing the magnificent colours on camera and were gazing up for hours. Some guest were out there until 2 or 3 am in the morning.

Missed the beginning of my expedition? Catch up on Day 1 and Day 2.