Brahmaputra River Cruise Day 7 - On board and island BBQ

Today was a relaxing day on the river, with no planned stops for MV Mahabaahu, so we spent the day chilling out on the sun deck, taking in the sun and watching the river for the elusive Gangetic river dolphin. We spotted a few but they only break the surface to take in more air then disappear quickly. They have a long snout and pink bodies and are quite different from the sea dolphins that we are more familiar with. The dolphins were originally found throughout the Brahmaputra and Ganges river systems, but the population has dramatically declined over the last 50 years, and there are fewer than 300 individuals left in the region.

During the afternoon I had a massage in the on board spa that was excellent. The boat has a well-stocked library, touching on local Assam subjects as well as India as a whole, Hinduism, and other fascinating subjects. There was a cooking demonstration too held by the ships chefs that was well attended.

At about 6 pm the ship tied up to a deserted island for a beach party. We peered over the railing as we watched the crew pole-vault from the ship’s bow to the sandy banks, some of which were crumbling away from the current of the river - right before our eyes! 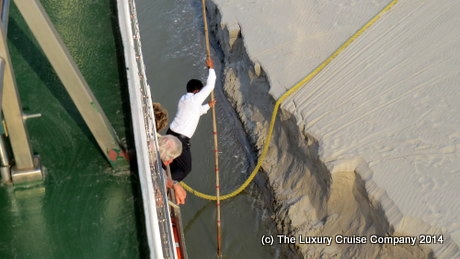 Pole vaulting off the bow to tie the boat up! 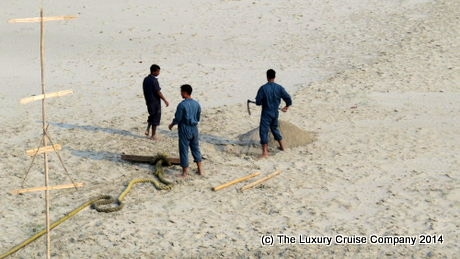 Crew digging in the posts to tie the boat up to 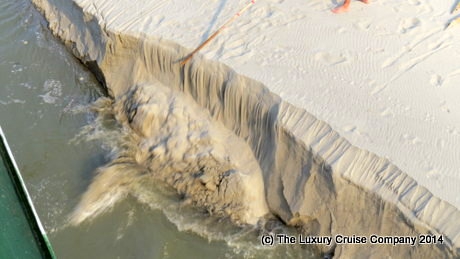 Crumbling banks of the Brahmaputra River

Once the ropes had been secured they set up the chairs and BBQ area ready for the evenings celebrations.

We were given traditional Indian clothes to wear, and everyone got into the spirit of things with the ever helpful crew helping the ladies and gents to tie them correctly. 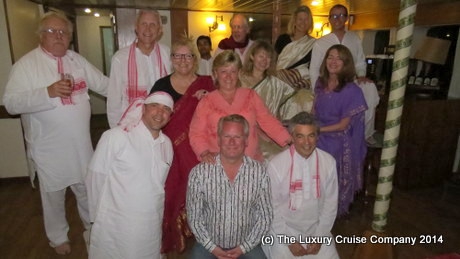 Crossing the make shift gangway fashioned out of bamboo, we were greeted by the sight of a roaring bonfire, surrounded by chairs, alongside a bar a BBQ ! What a wonderful experience for our last night! 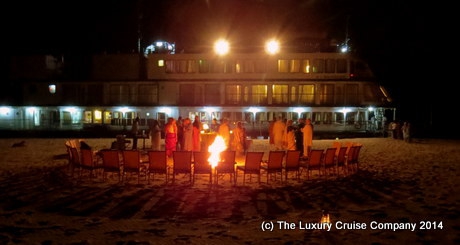 Beach BBQ on the Brahmaputra River 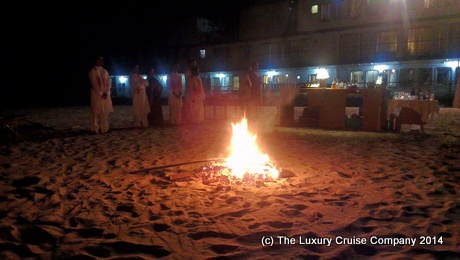 Beach BBQ on the Brahmaputra River

The ever present barman Rajish was on hand to serve us drinks and cocktails. 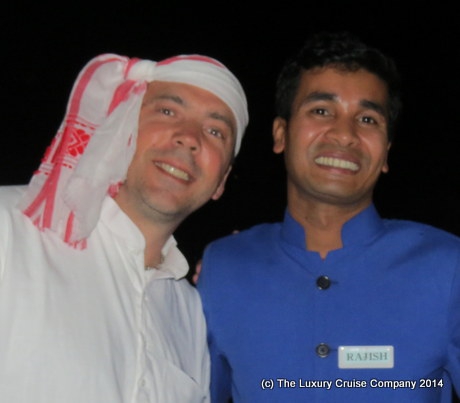 Me and the excellent barman Rajish 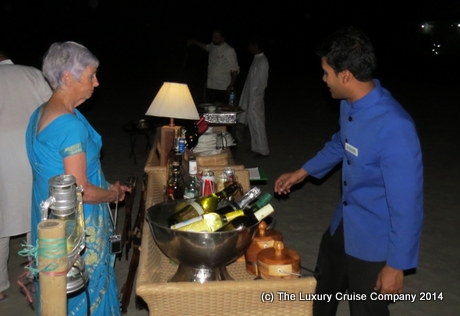 Bar on the beach, with Rajish, natch!

Once all guests were on the sandy beach, we were invited to play some games, that I can only describe as beer fishing! Large bottles of kingfisher beer were placed on the sand and the contestants were given sticks of bamboo with string tied on one end. On the end of the string was a plastic hoop, and the aim of the game was to place the hoop over the neck of the bottle, easier said than done believe me! 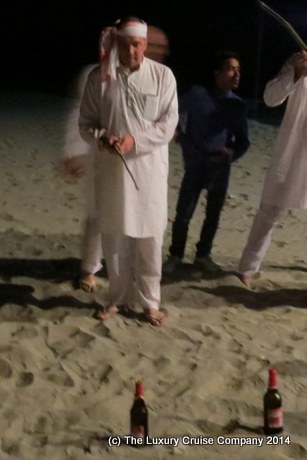 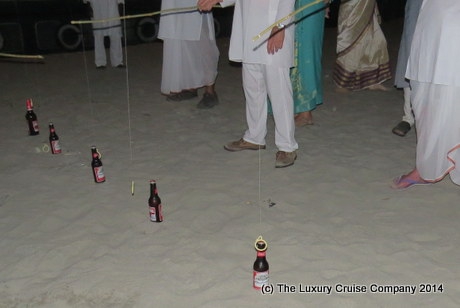 We had two minutes to try achieve this and the hoop just kept swinging about! At the 30 second countdown I just started plopping it randomly on the bottle and lo and behold the ring slipped over the neck and I had won! My prize? Well the bottle of cool kingfisher of course!

Payal and Shagzil got dressed up too

After helping ourselves to kebabs, paneer and chicken from the BBQ , we all sat in a semi-circle around the bonfire and Nina, the cruise director, introduced the crew that had been helping us all week. 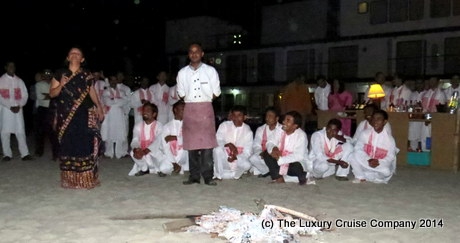 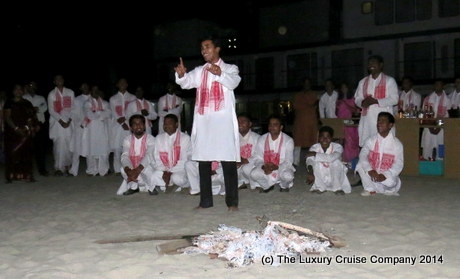 The crew bursting into song

Some of them gave us a song and dance which was really lovely. It was quite emotional as it was our last night of the cruise, and all the staff were so genuinely nice, it felt like we were part of their family, and it was a wonderful feeling.

Thanks Scott. The blog and photography are marvellous and brought back happy memories of a great holiday. A highlight of all my travels was the elephant safari. You missed the early morning yoga both in the water and on board which were also good fun Thanks again Best wishes Mary
(Ms Mary Leonard)

Read my first-look #cruise review from on board Scarlet Lady, the first ship from @richardbranson new start up… https://t.co/CyBiCuSJQS
1 hour ago

Read my first-look #cruise review from on board Scarlet Lady, the first ship from @richardbranson new start up… https://t.co/8V8cTba1Im
16 hours ago