After breakfast at 8am we had a talk and presentation about tomorrow’s excursion to the Kaziranga National Park informing us what to expect and how the elephant safari would operate. We were also educated on the diversity of animals and bird life that is sustained by the Kaziranga National Park. The park is a designated World Heritage Site, and Payal advised it is home to Great One Horned Rhinoceros, Royal Bengal Tigers, Elephants, Swamp Deer, Wild Water Buffalo, Jungle Cat, Fishing Cat, Indian Gray Mongoose, Hog Badger, Leopards, and so many more animals including a myriad of migratory birds.

Promptly after the talk we boarded the ships tender and headed for shore. Today’s village was far more developed than yesterday’s bamboo-constructed huts, with concrete buildings, windows with glass in, tarmac roads and temples. 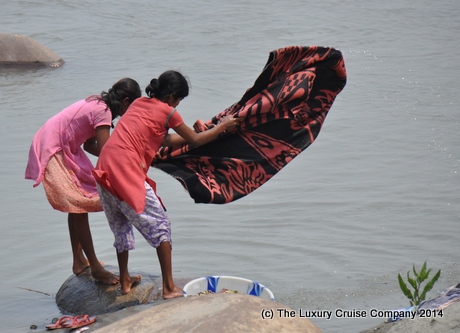 Washing on the Brahmaputra River 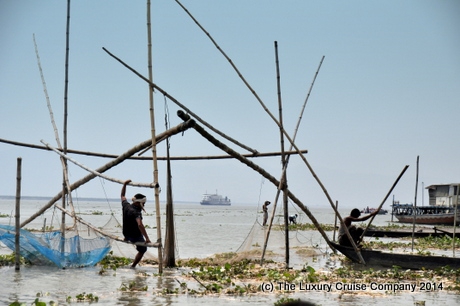 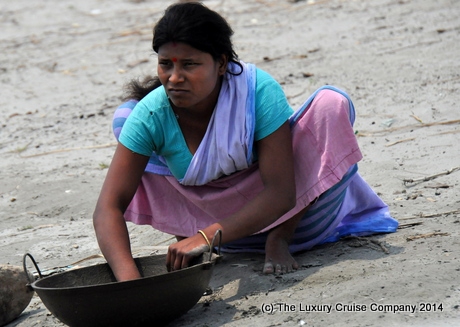 After a short tender ride to shore we debarked onto a sandy beach (no docks here) and were able to witness some of the locals washing their clothes in the river. There was also a local man fishing in the typical cantilevered style on the shore side, whilst other still washed their dishes. 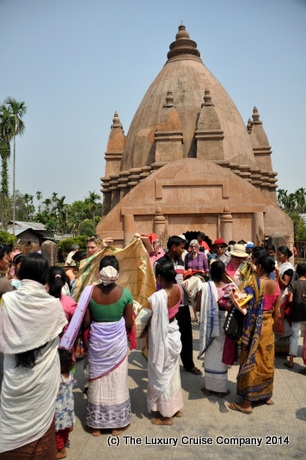 Clambering up the sandy beach we entered the village and were warmly greeted by a myriad of locals. The village makes a lot of handicrafts especially woven cloth and soon a crowd of ladies had gathered eager to sell their wares to the tourists! The MV Mahabaahu is the only boat to visit this village, and so the weekly stop is eagerly awaited by the locals. 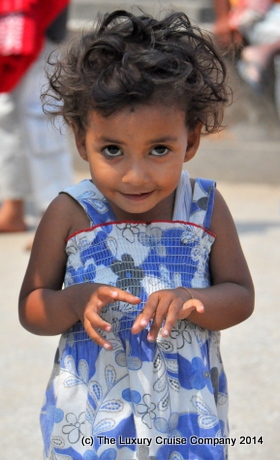 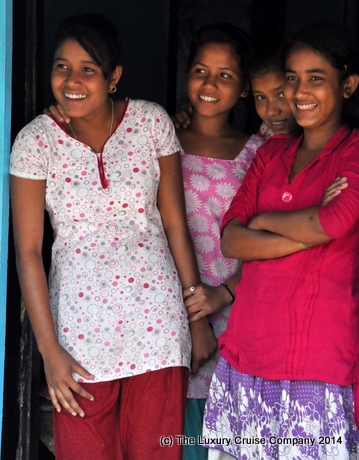 As we walked down the road we snapped photos of the smiling locals as we headed to the temple, and then visited a building where we watched a group of local women weaving cloth on traditional looms. 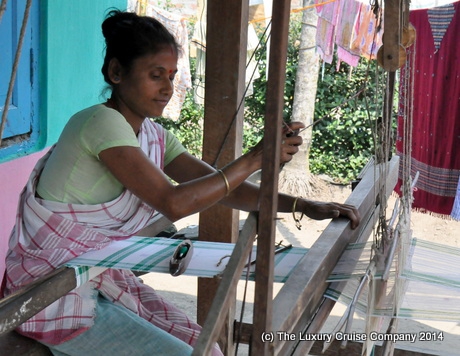 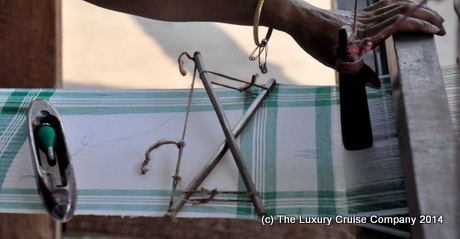 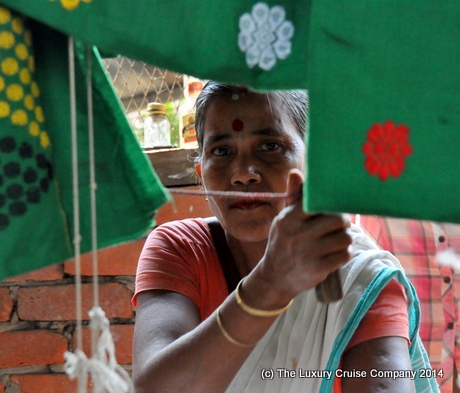 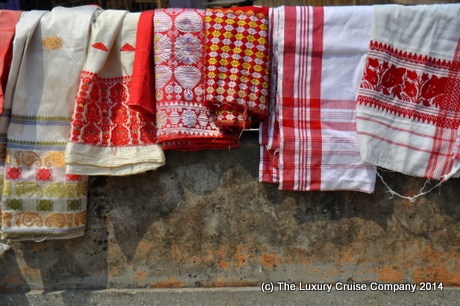 We were then directed through the village to a grassy area where we were treated to a vibrant and noisy dance and musical recital, with the locals dressed in their traditional outfits playing drums, and horns . 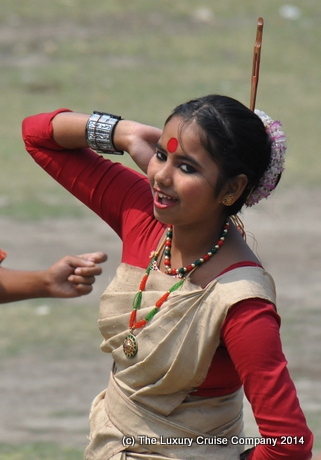 We wandered back to the MV Mahabaahu via a promenade that hugged the high river banks and returned to the beach area to board the tender back to the ship.

Back on board and the ship set sail for our afternoon port of call. We headed up to the sun deck to watch us sail away and to keep our eyes peeled for any animals that might have wandered down to the water’s edge, and we spotted a heard of water buffalo far in the distance on the river bank, then excitedly, I spotted a rhinoceros , alone and in the distance! I grabbed my camera and got a few shots, very grainy but it was a rhino! We had bragging rights as we made do our way down to lunch!

Water buffalo, and the rhino on the right hand side (that white blob!)

After lunch we docked at Silghat, and it made a change to be able to walk off the ship rather than use the ships tender. We had to cross a bamboo constructed bridge/walkway to get to shore - a bit rickety but it did the job! Crossing a very dusty and sandy path we headed to a car park where our jeeps would take us to the Kaliabore Tea Plantation.

After a brief drive through of the village we arrived and were allowed to explore the plantation house that used to be owned by a British family, called Eyton-Jones, but was now owned by an Indian family. The British family still come to visit every year, and there was a photo of Gerald and David Eyton-Jones dating from 2008 on the wall, amongst other family photos, some dating back to the 1950’s. There was also newspaper cuttings about the estate and various tea auctions. 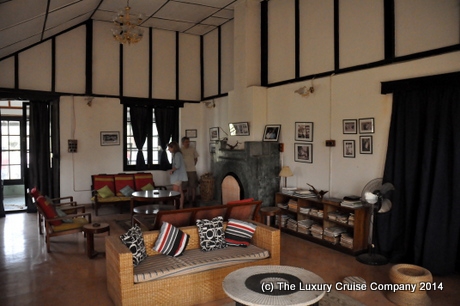 Inside the plantation house, Kaliabore Manor

One particular photo stood out as it was taken on board the P & O Line ship Himalaya, on which David and Diana Eyton-Jones travelled to India back in 1950. The rooms were available to rent so guests could stay there if they wanted. The house was a throwback to old colonial days, with large ceiling fans, glass fronted porches and original electrical switches, that looked decidedly dodgy! They even had a cannon in the front garden! 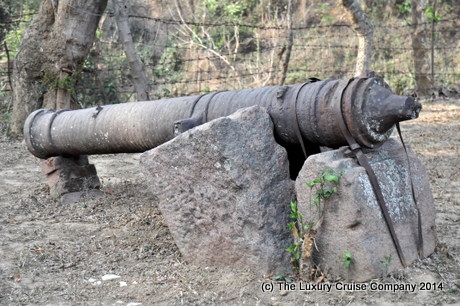 After free time to wander around here it was a short drive to the tea plantation. Stretching out over the hills and fields were thousands of tea bushes, a myriad of bright green against the orange coloured soil. Sanjay explained about the tea plucking process and we wandered through the plantation heading to the tea processing factory. I would have liked to have seen some of the Indian tea pluckers but as it was late in the afternoon they had all gone home, however we were greeted by some very excited children! 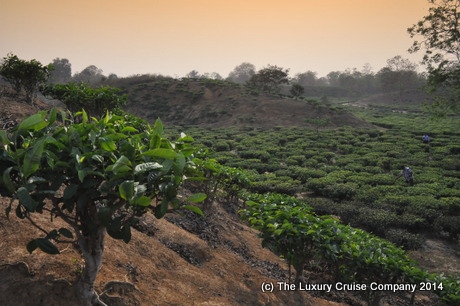 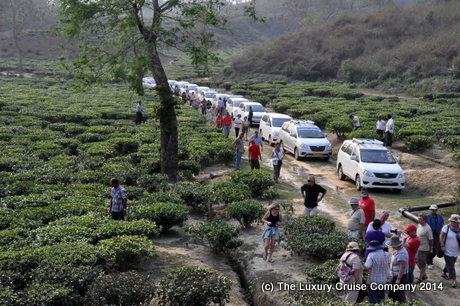 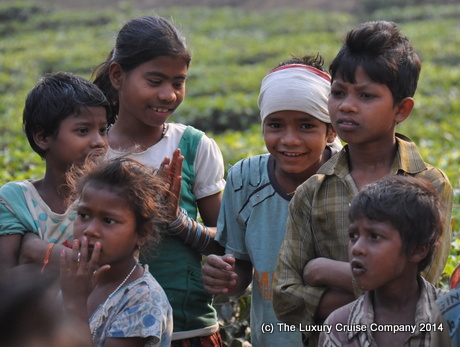 All teas go through a five stage process: withering, processing, oxidisation, drying and sorting. At the factory we saw how the leaves we placed in giant aerators to slowly dry out for the withering phase, and then the leaves were transferred to a CTC Machine which crushes, tears and curls (CTC) the leaves. 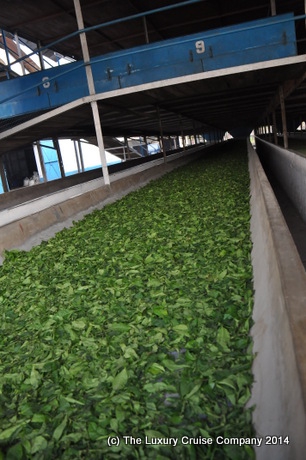 The treated leaves are exposed to the atmosphere and allowed to oxidise, resulting in a series of chemical reactions that determine the strength, aroma and colour associated with black tea. The leaves are then passed through a dryer in a process called firing, and this is where the leaves turn from green to the more familiar brown/black colour.

The dried leaves are then sorted according to size by giant machines that sieve them into different grades according to their size. This estate produces the CTC tea, (crush, tear and curl), rather than the green tea process which is different. The machine sorted them by size and deposited them into plastic buckets via a vibrating hopper. 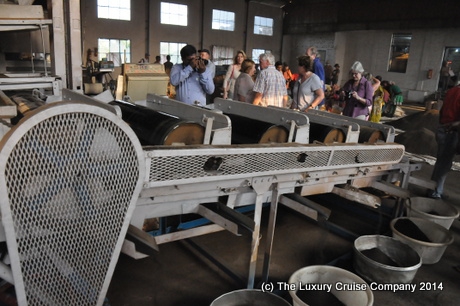 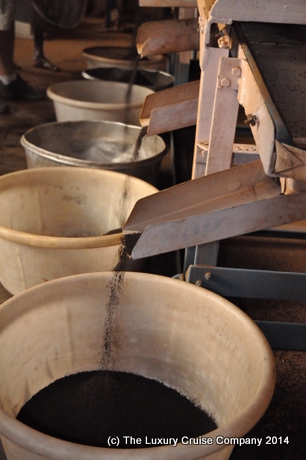 Sari clad ladies emptied the buckets into huge mounds on the floor and transferred the tea into sacks. The smell of tea was thick in the air, almost as thick as the dusty atmosphere created from the crushing process. 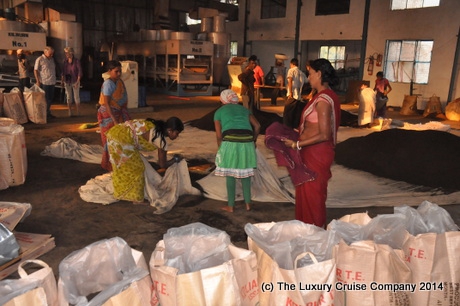 Packing up the tea

The tea leaves end up at tea auction centres for companies to bid on, who will then blend the final tea product from a number of different plantations. Tea plantations in Assam are one of the largest employers in the area, and the pluckers and staff are well looked after by the estate owners, who often provide accommodation, education, hospitals, and other benefits for their workers. Throughout India, the tea industry directly employs some 1.25 million workers.

We returned to the ship with time to shower and change before dinner. It would be an early night for all the guests as we have to get up at 3am for tomorrow’s elephant safari in the Kaziranga National Park. Yes 3am, but it will be well worth it!