We woke early as the sun rises about 5am and headed out on to the desert island before breakfast. In the distance Nina was taking a yoga class out on the sand, and had quite a crowd enjoying her stretching. Some of the crew were playing cricket (including the MD of the company, Sanjay Basu) 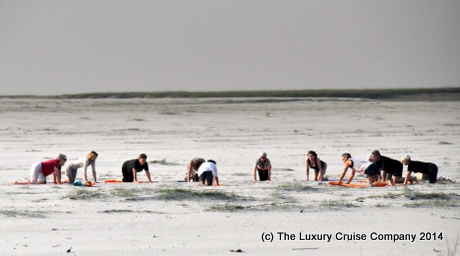 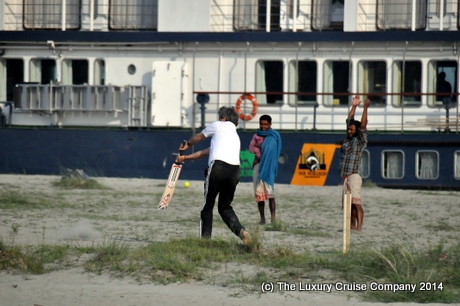 Sanjay playing cricket with the crew

We headed off exploring and went to the water’s edge, and touched the Brahmaputra River! The water was clear and warm and I was surprised to see the water level rising as the river was starting to encroach on the island. Apparently overnight it had risen by two feet. 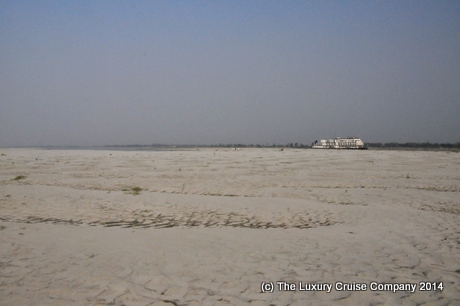 This really is exploration cruising, tied up to an uninhabited sandy island in the middle of the river, with no other tourists in sight. It was so peaceful and relaxing and I really felt at one with nature - no wonder Nina had so many for her yoga today. 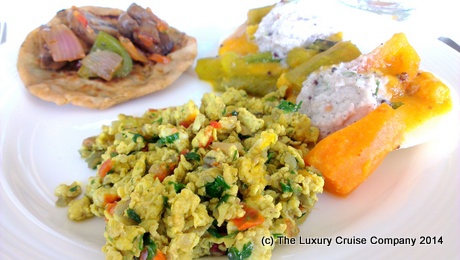 After some time enjoying the sand, we headed back on board in time for breakfast. Today I went entirely Indian and had Akori, an egg based dish with coriander and chilli, so good I had seconds, all washed down with a mug of strong Assam Indian tea. The ship’s crew dismantled the temporary bamboo gangway and pulled in the ropes and MV Mahabaahu set sail.

Today we would be visiting a typical village of the Mishing people, located in the Luitmukh region. The ship sailed along the sandy, high bank looking for a suitable village, and once chosen, dropped anchor. 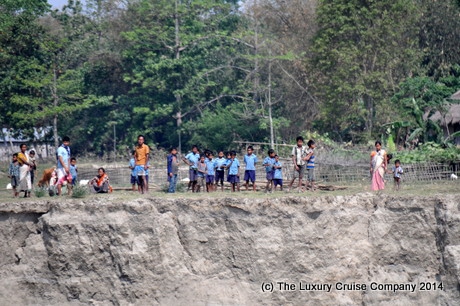 A warm welcome from the locals

The arrival of a tourist boat caused much excitement in the local village, with the entire population of a school running out whistling and whooping to greet and wave at us from the top of the sand embankment. The ship sent over one of the tenders with a few crew members to chat to the village elders. 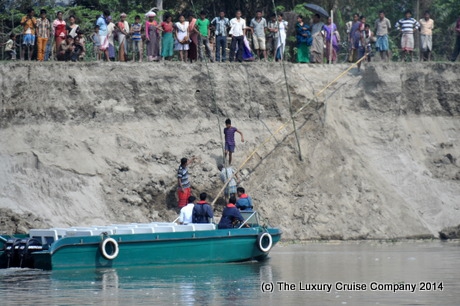 As we watched, one of the locals started carving steps into the embankment and fixing a temporary bamboo hand rail, however it was deemed too steep so the ship’s captain decided we could land at a beach a small distance away. 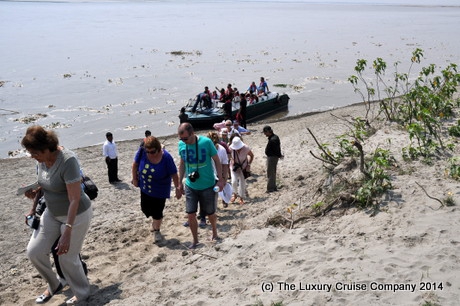 Making our way to the village

In the main lounge we donned our life jackets and made our way onto the tenders, which quickly departed. As we travelled along, the locals ran along the embankment to greet us when we debarked onto the white sandy beach. Clambering up the sand bank we made our way to a grassy plain on the edge of the village. A local was passing holding a very long bamboo pole and after a quick word with Nina the cruise director, allowed us to follow him and view his house. We found out the village was called Balukagusi Village and had been established since 1983. The ship had never stopped here before, in fact this village had never seen tourists before, so this really was exploration cruising at its finest. Shagzil advised us that if we wanted to give money to the locals to support them, then it was best done in the form of buying their locally produced wares and handicrafts, such as basketry and woven cloth. Some of the guests had brought pens and pencils for the school kids, and we were advised to give these direct to the teachers so that they could distribute them evenly. We were also told not to give money in return for taking photos as this could create a precedent and encourage begging for future stops. Far Horizon Tours who operate the MV Mahabaahu ship and other holidays in India really try to give something back to the communities they visit, and have invested in local communities in providing school equipment and other facilities; this is very important to me and I was glad they did this. 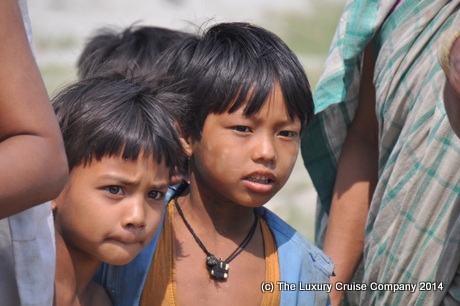 As we made our way to the village edge, word had got around of the tourists arrival and this was generating much excitement and curiosity amongst the villagers. Small children were staring and looking at us with inquisitive eyes as much as we were them! They loved having their photos taken and were delighted in seeing themselves on the screens of our cameras, it was an absolute joy to see their faces light up as they viewed themselves on the small screens! 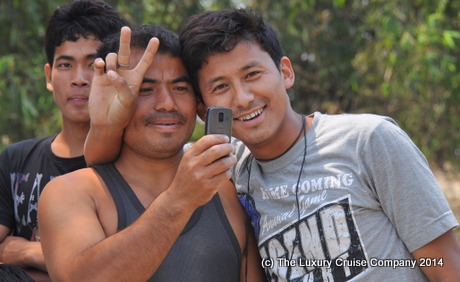 Many of the adults had mobile phones and were taking photos of us taking photos of them! A lot of the houses had a small solar panel stuck on top of a bamboo pole so they could charge their mobiles. The village consisted of a number of bamboo constructed dwellings, and we were invited into a few of them by the welcoming locals. 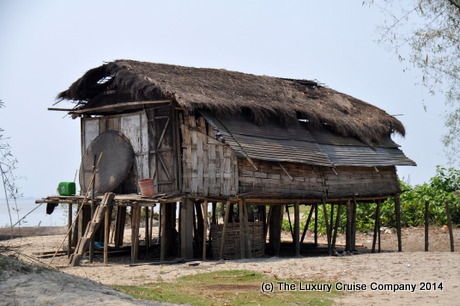 Tentatively climbing the steps hewn into a log, we saw a bamboo lattice floor, and in the centre a fire pit and stone hob for heating water and cooking. Bamboo walls of course and sleeping areas were also here, and that was about it - very simple and finished off with a thatch-style roof. 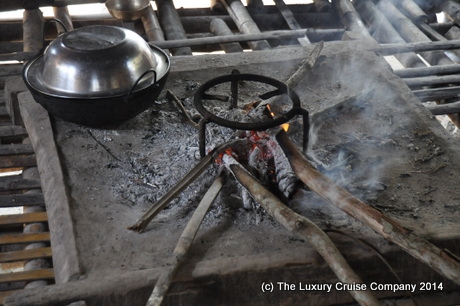 Cooking area in the Mishing house 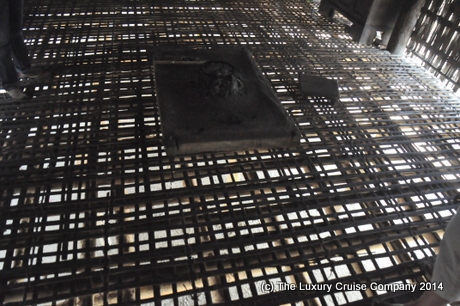 Floor of the Mishing Village house 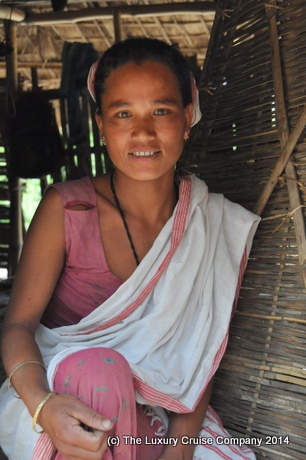 As we made our way through the village, we had an entourage of village kids and others, and some of them ran off to get instruments for an impromptu dance performance! Some of our group joined in with various forms of dad-dancing and body shaking! 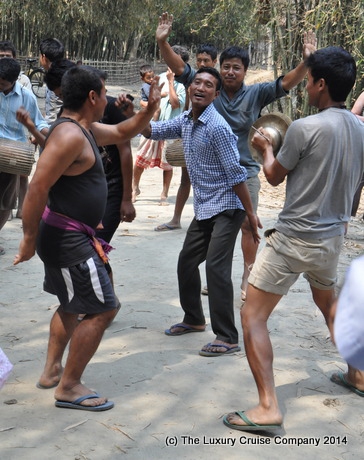 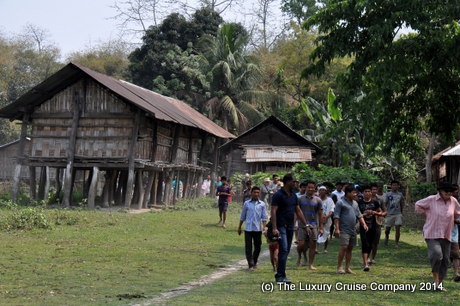 Walking through the village we came across a saw pit, and towards the rear of the village was a concrete constructed school where the children were happy to pose for photos. 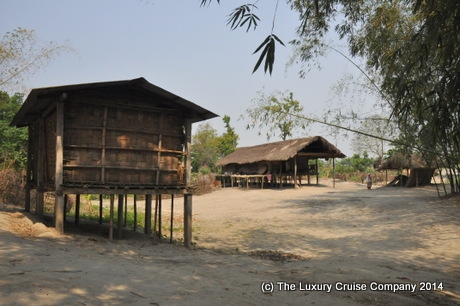 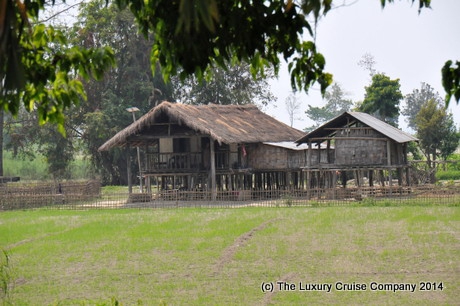 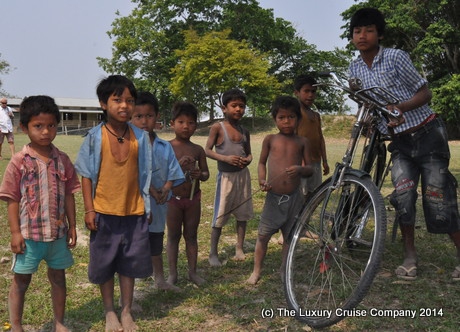 School kids in the Mishing Village 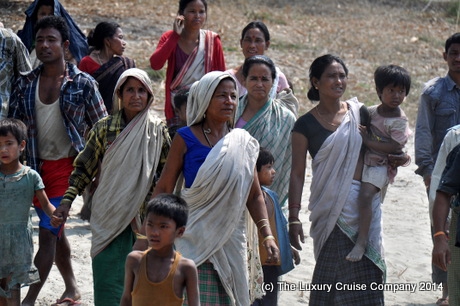 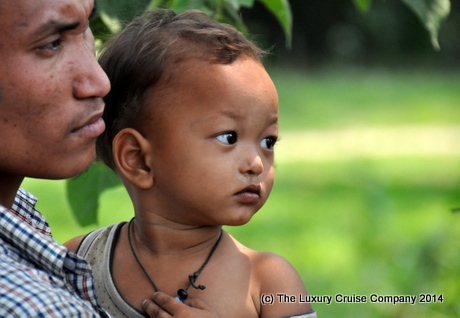 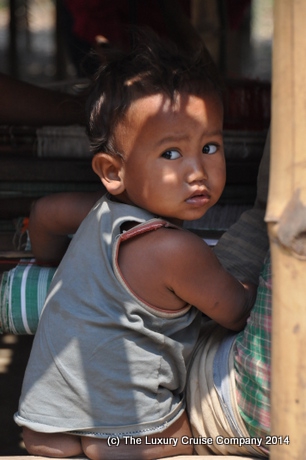 After wandering around here for a while we headed back to the river bank as it was time to board the tenders and return to MV Mahabaahu. It seemed the entire village followed us to wave cheerio from the banks. 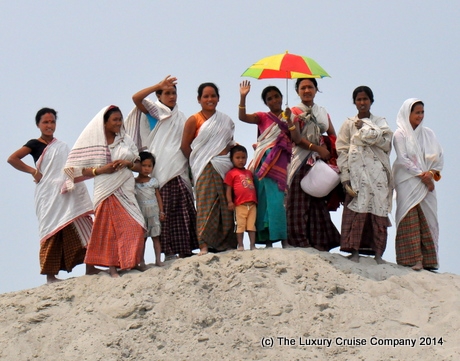 A farewell from the Mishing Village 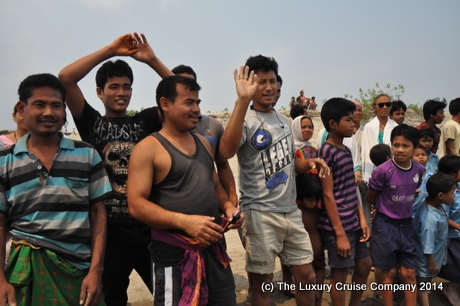 It was a real honour to have been part of their lives for a few hours, and to see how they live - untouched by tourism and commercialism; a really genuine, humbling experience that will stay with me forever. A definite highlight of the cruise.

Back on board for lunch, the ship set sail for an afternoon of river cruising as we headed to the Dhansari River and the banks of Kaziranga National Park. 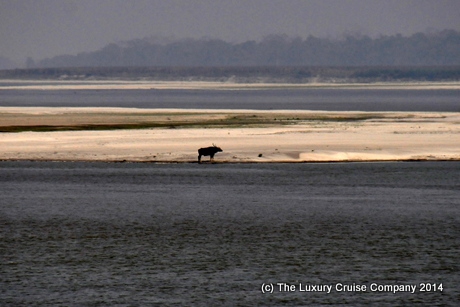 Up on the Sun Deck looking towards the shoreline, we spotted a water buffalo that caused great excitement! We also saw the elusive river dolphins, but they were still too quick for a photo. 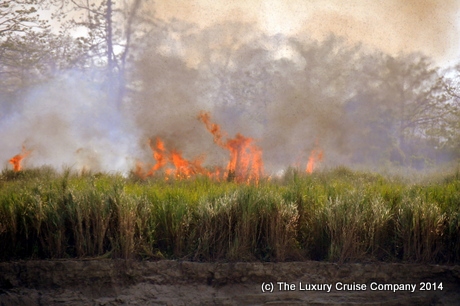 As we got closer we could see part of the jungle was on fire! It was a roaring blaze sending great plumes of smoke shooting skyward. I was quite concerned but it turns out the park ranger’s regularly burn areas where there is older elephant grass to encourage new shoots to grow, so that the animal’s have fresh food to graze on - nothing to worry about!

The afternoon excursion was a Boat Safari; we were told we could expect to see abundant birdlife, turtles, and possibly water buffalo and rhino, and maybe even the elusive Bengal Tiger - however in the two years the trip has been running no-one has spotted one of these shy creatures.

Late afternoon we disembarked the ship onto the tenders to view the banks of the Kaziranga National Park on a boat safari. As we neared the banks we spotted water buffalo, pied kingfishers, Indian roofed turtles, vultures, parakeets and more. 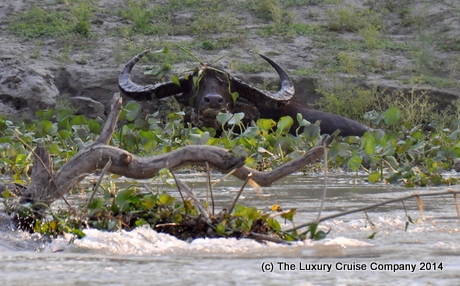 As the lead boat was casually cruising along, one of the ship’s crew, who was our wildlife lookout, excitedly pointed towards the top of the sandy embankment. There, peering out between the elephant grass was a tiger! We couldn’t believe it! He was staring at us and after a few seconds bared his teeth as if to ward us off his territory. Some of the passengers got over excited and made some noise, at which point he turned and disappeared back into the jungle. We were so lucky to have seen him! Unfortunately those in the following boat missed him... still we were happy to share out photos with them! 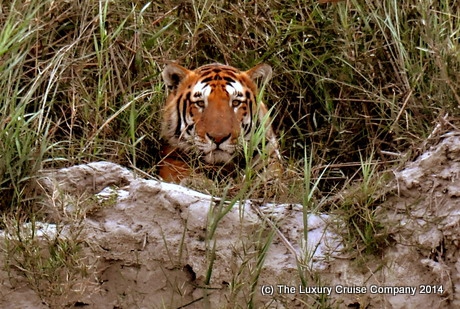 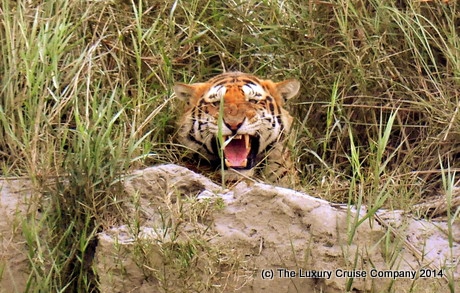 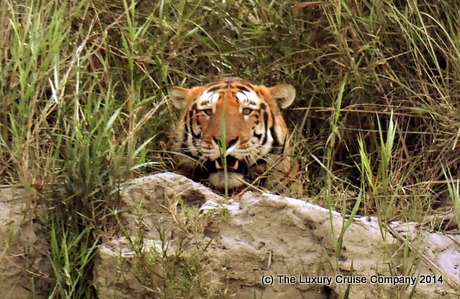 By this time the light was fading, so it was back to the MV Mahabaahu to freshen up and enjoy another delicious meal on board. What an amazing day - deserted island, remote village and to top it off a sighting of a tiger - fantastic.

Scott, Many thanks for sending all your information , photos etc. (Anne sent them on to me) They put my efforts to shame; I have filed them to look at from time to time in the future. Before our cruise I purchased in Agra a marble elephant with a great deal of inlay work. I collected it from Oz customs (after paying duty of $400) yesterday when my son-in-law pointed out that it looks as if one of the tusks had been broken off and glued back on; (the repair work was very good and is hardly noticeable).no wonder the lighting in the shop was a bit dark. After leaving India 5 Oz widows and myself had 5 days in Bhutan which was very interesting and different to India. Life has been a bit hectic since my return; as well as attending a couple of Board meetings at my old school (130 miles west of Sydney I am presently preparing for a month in Scotland most of it on a cruise organised by an Oz company Captain’s Choice departing on 5 May. Once again many thanks; your time devoted to shorthand and photographic skills certainly paid off. Regards Eric Matheson
(Mr Eric Matheson)