It was an early start on MV Mahabaahu today - up at 5:30am to shower and get ready for breakfast! Breakfast was a mixture of usual cereals, pastries, tea and coffee and a selection of hot dishes including hard boiled eggs, bacon and some Indians dishes that were spicy and very tasty. There was an egg station too for omelettes. Breakfast finished promptly at 7:15am making way for a talk about what we would be seeing that day. Chairs were pushed round to face a large flat-screen TV ready for the presentation. 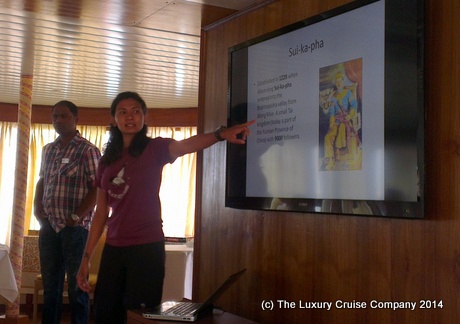 Today we were going to visit Sibasagar to experience the Ahom culture, with a visit to their ancient monuments. The talk was given by Shagzil Khan, our tour leader, and Payal Mehla, our naturalist, and it was great to have background information about what were would be seeing later that day. After brief history lesson about the Ahom culture it was time to debark. It was great to see the MV Mahabaahu in the daylight, tied up to the sand bank. 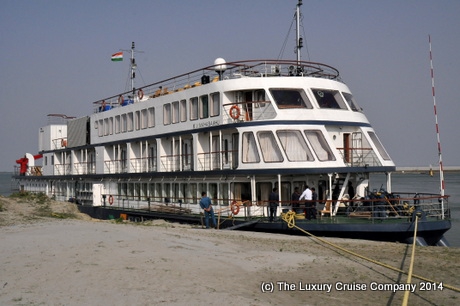 The ship hadn’t moved and we boarded jeeps again to take us on the one hour drive to Sibasagar, the ancient city of the Ahom kings. The town, which literally means ’the ocean of lord Shiva’ is strewn with the tell-tell signs of an ancient powerful empire. Sibasagar was the capital of the Tai speaking Ahom that came into the area from Yunnan, China in the 13th century AD. 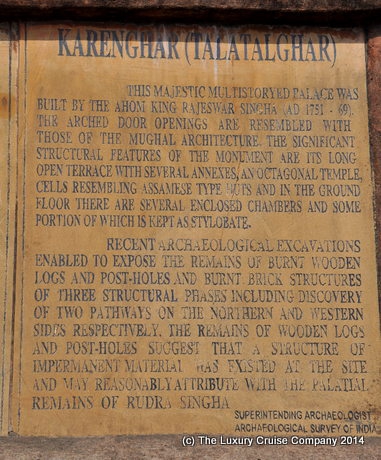 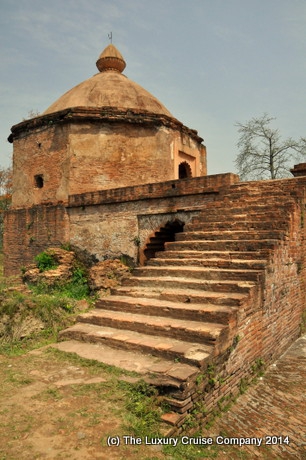 Our air conditioned jeep was soon on its way headed to our first stop at Rangpur, the monument called Talatal-Ghar, a palace which was initially built as an army base. Construction of this edifice was started by King Rudra Simha, but was completed during the time of his successor Rajesvar Simha. We had a brief talk at the entrance and then were allowed plenty of free time to wander around and take photos. At the back of the monument was a tank, or large lake, where we saw Golden Egrets perched on a wall - our first bird life! 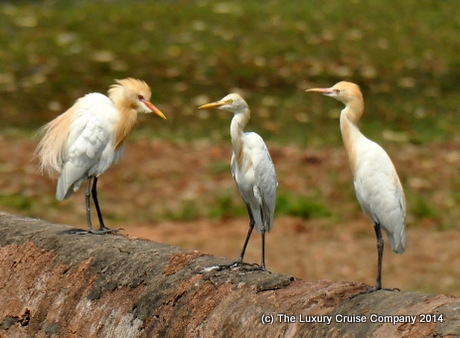 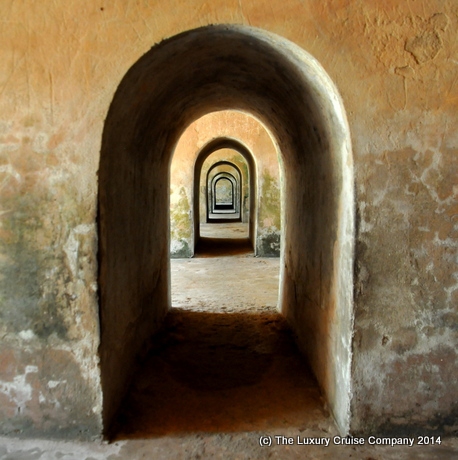 After our visit to Talatal-Ghar, we drove a short distance to Rang Ghor, another monument located on the outskirts of Rangpur. This was constructed during the time of the King Parmatta Simha as a pleasure house for the royal members and dignitaries to witness and enjoy out door games such as wrestling, bull fighting and cock fighting. 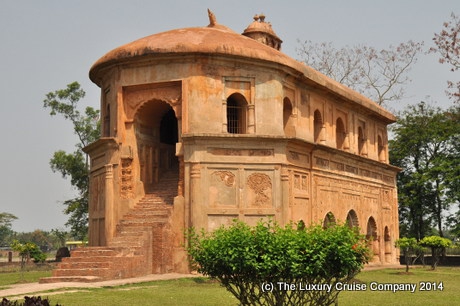 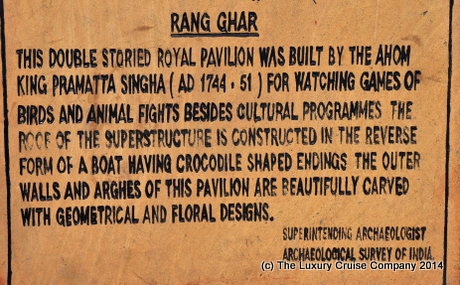 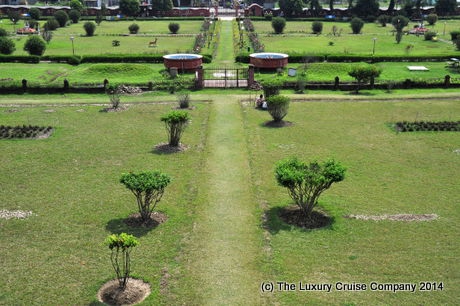 View of the grounds at Rang Ghor 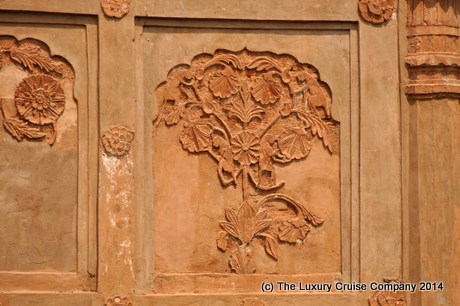 Close up of carving - Rang Ghor

Our final monument was the Sivadol, decorated with a honey comb design. The Sivadol was built in 1734 by Bar Raja Ambika, queen of the Ahom king, and is believed to be the tallest Shiva temple in India, standing at 104 feet tall. It is topped by an eight-feet high golden-dome. Each year a huge fair is organised in the temple grounds and pilgrims from all over India arrive here to offer prayers. 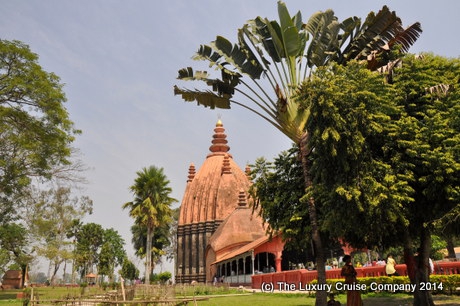 After a briefing from Shagzil, we were able to receive a blessing from a local monk which consisted of tying a red piece of string around the wrist and also marking the forehead with a bindi. 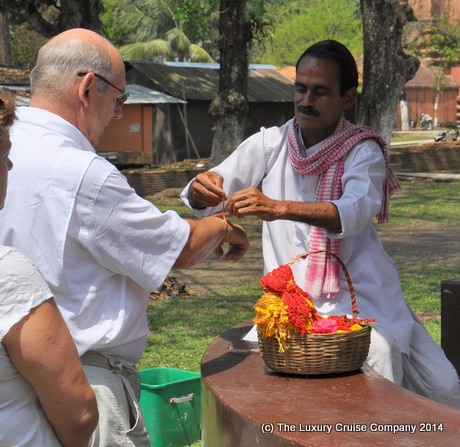 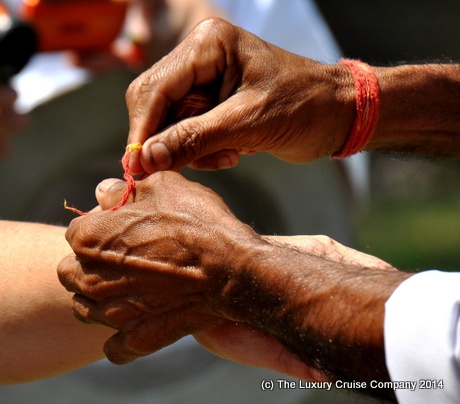 We were also provided with small ceramic bowls that contained solid paraffin and a wick so we could say a prayer and make an offering, (after removing ones shoes first of course). Our guides provided us with disposable covers for our feet so they didn’t get too dirty. 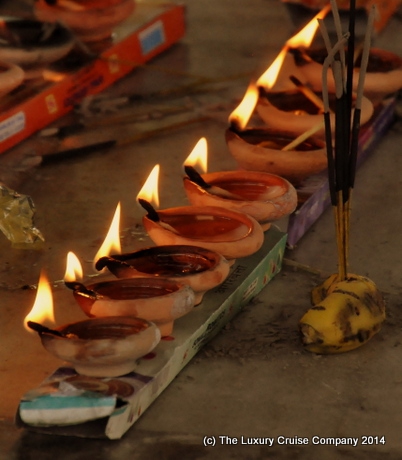 The area in front of the Sivadol was full of people offering thanks to the gods, ringing the bells, and burning incense. The air was thick with the heady aroma of burning incense cones and the floor strewn with the remains of wrappers and empty boxes. 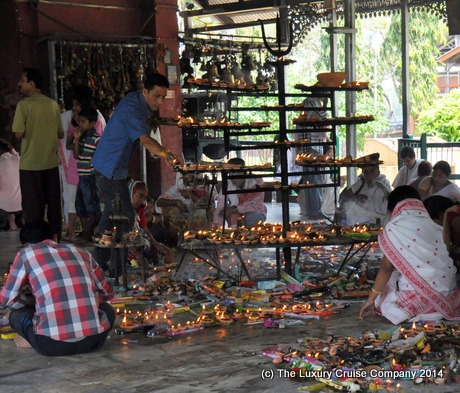 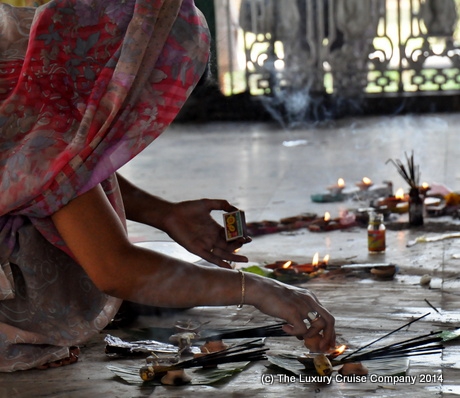 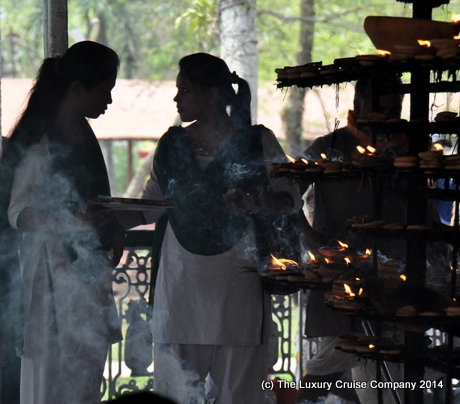 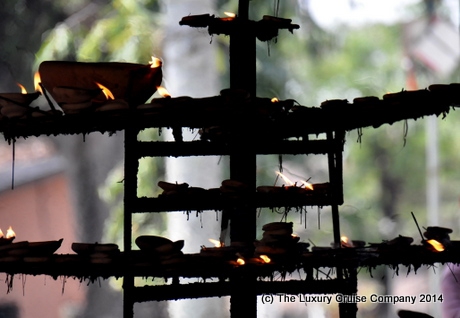 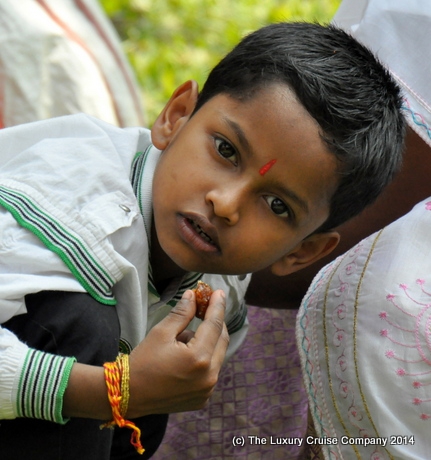 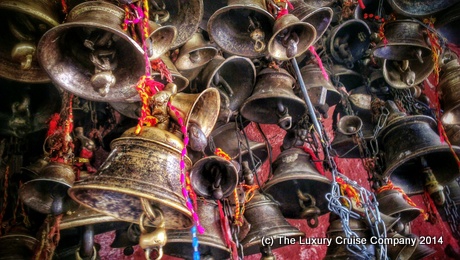 To the rear of the monument and across the road was a huge tank (or lake), and here we were lucky to see a silver throated kingfisher fishing for his lunch. Back in the jeep and we headed to the Haroocharai tea estate. 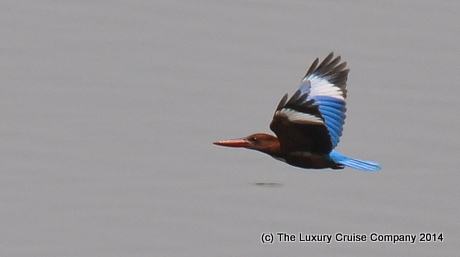 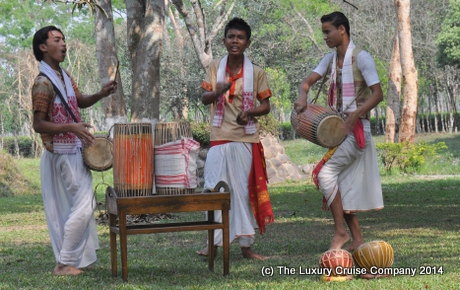 We enjoyed a musical performance followed by a dance called the Dance of the Seven Sisters. The female performers were dressed in the traditional outfits of their region, with Assam being the central and main one, naturally. The Seven Sister States is a name given to the states that make up north-east India - Assam, Arunanchal Pradesh, Manipur, Meghalaya, Mizoram, Nagaland, and Tripura 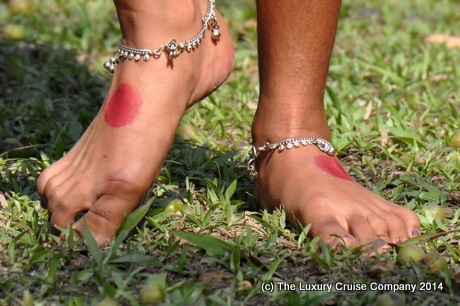 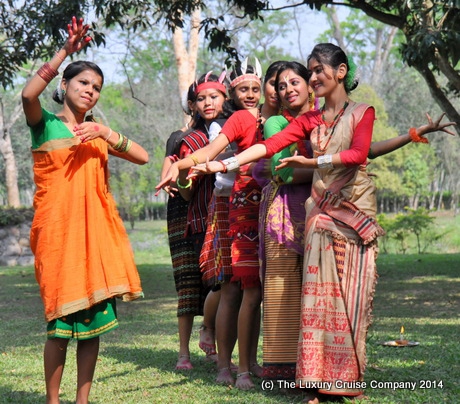 After the dance display, lunch was served buffet style, consisting of local Indian specialties and was really excellent, all washed down with a local Kingfisher beer, of course.

Next on the agenda was a tea demonstration, given by the owner, Rajib. Here he explained the process of making tea from the picking of the three leaves off the tea bush to the drying and sieving process to create the tea dust used for tea bags and the larger pieces for higher quality tea. 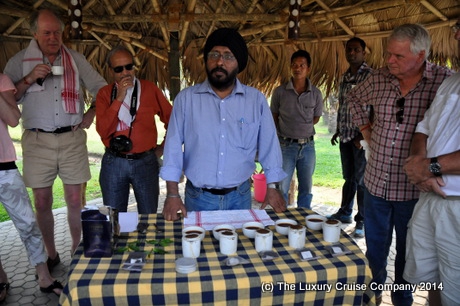 Adjacent to the gardens where we had lunch, we could see a number of tea pluckers working in the plantation, so I hurried off to get a few pictures of this iconic Indian scene. 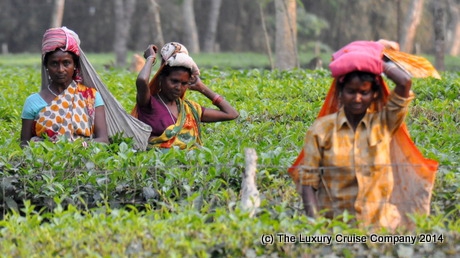 Then it was back on the jeeps for the hour drive back to the ship. The sun was setting as we clambered down the sandy embankment and made our way back on board our home for the week, the MV Mahabaahu. We were greeted by the delightful staff offering us warm hand towels to clean our hands on along with a refreshing chilled glass of lychee juice.

After showering and changing, it was time for dinner and then off to bed!

Links to the rest of the blogs

Ever considered a shorter cruise instead of a city break? Read our 4-night break to the Med #cruise #review! on … https://t.co/YDau8IghTZ
17 hours ago

Silver Muse or Silver Spirit? Which ship is better? Read on... https://t.co/9Nd8BxLl98 @Silversea#ThisisSilversea… https://t.co/KiI0x2itls
22 hours ago