Woke up and boy was it rough weather! Switched on the in-cabin TV and the view from the bridge showed wet and windy weather, and the Azamara Quest was pitching heavily in the swells. We headed up to the Windows Cafe for breakfast, and then Captain Carl Smith came over the ships PA system with a weather update. He told us we were facing 6-metre high waves and 30 knot winds, and it would remain like this for the rest of the day. About 30 minutes later, the Captain came on the PA systems again as we had reached the pilot station at Trapani, and the news was not good. The Captain and deck officers had been watching a tanker try to dock and it had been trying unsuccessful for quite a while. The Captain explained that the storm and weather front were only going to get worse, and that if we left now he could steer the ship around the storm and head to calmer waters, so the port of call at Trapani was cancelled. This was of course disappointing, however if we had managed to dock the tour would have been in the wind and rain so where would the fun be in that? So he turned Azamara Quest round and we headed back out to sea. 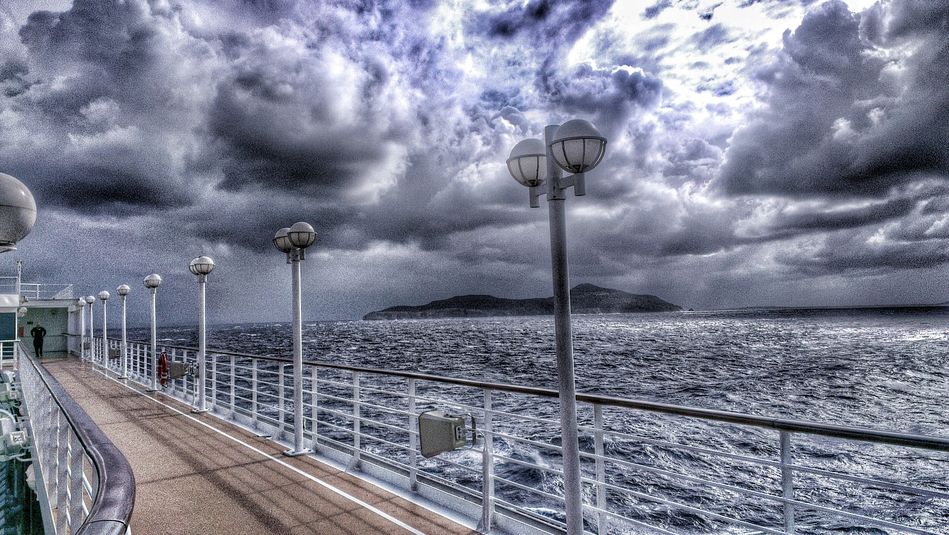 At this point I knocked back two sea sickness tablets (complimentary from the guest relations desk) as the swells were getting to me! The cruise director, Tony Markey, announced some hastily arranged new activities for this additional sea day which included a talk about when he was on a ship that was attacked by pirates! So the rest of the day was a wash out for many guests and the high winds and rough seas took their toll.

We found a nice place to sit around the pool grill, as the movement of the ship seemed less in this area, and so had lunch here and in fact spent the rest of the day here too!

What is the guest mix on board Azamara Quest?

In our copy of Pursuits, the ships daily programme, there is a breakdown of the countries that our fellow guests come from:-

So an international crowd!

That evening we dined in the Windows Cafe as it was Mexican buffet night! The food was really delicious and great variety, and we met up with some friends to enjoy the meal and of course the wine! You can also dress casually at this venue, and jeans are OK too. The motion of the ocean always makes me hungry, and a full belly helps me cope with the rough seas.

Entertainment that evening was UK 80’s comedian David Copperfield, who had flown in the day before to perform. David is an impressionist, magician, singer and comedian too. As one of the stars of the BBC 80’s sketch show "Three of a Kind", he shared the small screen with comic legend Tracey Ullman and Lenny Henry. This show won the prestigious Silver Rose Award at Montreux, and David won BBC television Personality of the Year. Born and raised in Yorkshire, David began his professional career performing in various cabaret venues until his big break in TV earned him appearances on Wogan, Cliff and Friends, and his own shows "Coppers & Co"

He was worried that no one would show up as it was still relentlessly rough, but he had a packed show room for his wild cap antics, impressions and singing. After the show we headed up to the Looking Glass, however as this room is located right at the front of the ship, we lasted 30 seconds before we turned around and headed back to our cabin!