Castellammare and Sorrento on Azamara Quest

We are still tied up at Castellammare, and our tour today is "A Taste of Sorrento". After boarding our bus and being introduced to our bubbly guide Matilda, we headed off. We were lucky with the weather as it was dry and the sun was trying to come out, quite mild too. We drove back to Sorrento, along the same route we took yesterday, however we stopped along the way for a "Kodak stop" as Matilda called it, high on the cliffs overlooking the bay of Sorrento. It was quite cloudy but we still had great views of the town and surrounding hills.

Back on the bus and we made our way through the town of Sorrento and headed up in the hills to a traditional olive farm called La Culline di Sorrento. Here we were met by Gina, a delightful English lady who had lived in Italy for over 10 years. 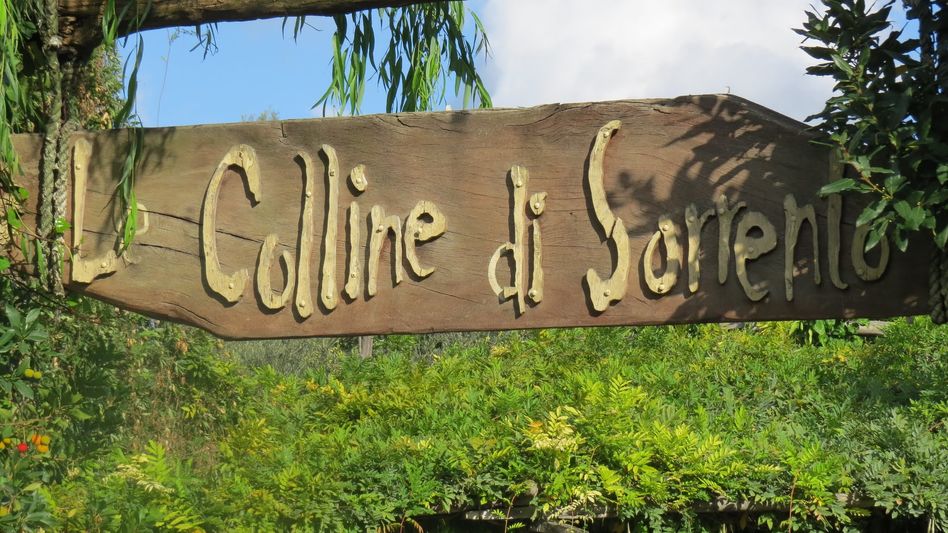 She explained how the olives were harvested - first nets are placed under the trees and then the branches whacked, so the ripe olives fall down into the nets suspended underneath. After the talk we were shown the olive oil pressing machines and the equipment used to make the cold-pressed extra virgin olive oil. First the olives are crushed by huge stone rollers, and then the resulting mush is spread onto circular mats. The mats are then stacked on top of one another and pressed to release the precious oils. The oil is obtained from grinding the Minucciola, Rotondella and Leccino olives, either individually or jointly, to obtain the unique flavour and characteristics of "The Hills of Sorrento" oil.

Lemons, oranges and grapes were also gown here at the farm and they produce their own Limoncello drink, as well as a walnut liquor called Nocino. Gina led us to the small restaurant on site and we enjoyed a demonstration of how they make mozzarella cheese, and got to sample some, along with cold meats, a few other varieties of cheese, an aubergine paste and a homemade tapenade of chilli called Bacio Del Diavolo.

This was washed down with a nice glass of locally produced white wine - it was only about 10:30am, still, somewhere in the world it was happy hour!

After our local food tasting experience we headed over to the shop area, where you could try the liquors and olive oils produced on the premises. Gina was very generous with pouring the tasters, and we enjoyed healthy measures of Lemoncello, the walnut liquor, and a fennel liquor. All were really good and we ended up buying a bottle of the fennel one and the walnut one, along with the chilli paste we had tried earlier. 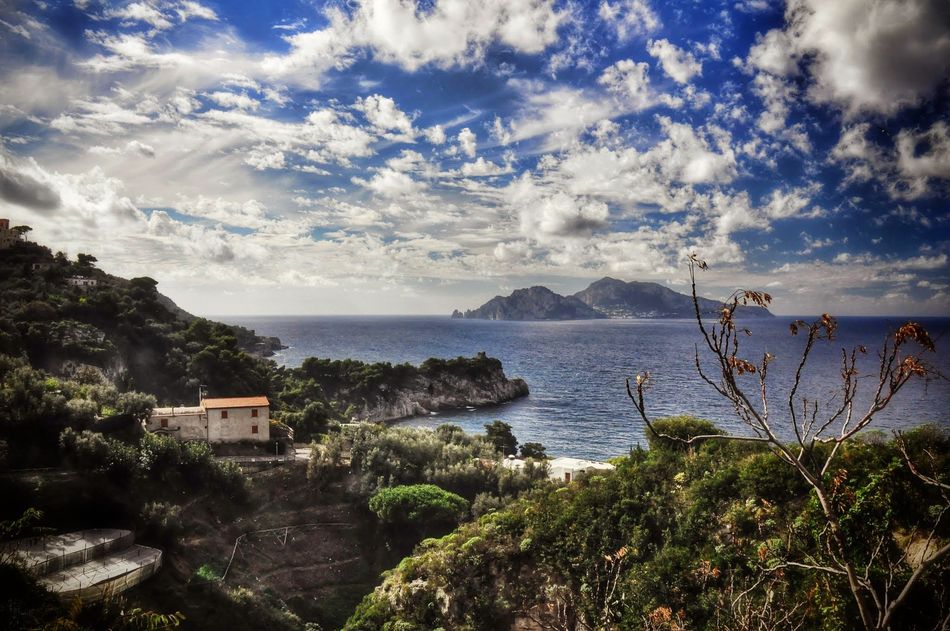 View of Capri from the town of Termini, Sorrento Coast

Back on the bus we enjoyed another drive along the Amalfi coast where we stopped at a village called Termini, offering up splendid views of the island of Capri, just off the coast. We then headed back to Azamara Quest. It was a really great tour, and nice not see endless churches, museums and cathedrals, and to try some authentic, locally produced foods and wines. I really enjoyed it, and this small-group destination-immersion tour is what Azamara Club Cruises are all about.

Back on board we had lunch at the pool grill, firm becoming our favourite place, and sat on deck in the sun for a while before enjoying a late afternoon coffee and cookie at the Mosaic Cafe, located on deck 5. We went up on deck for sail away and I took a couple of shots of the pool deck lit up at night in the twilight. 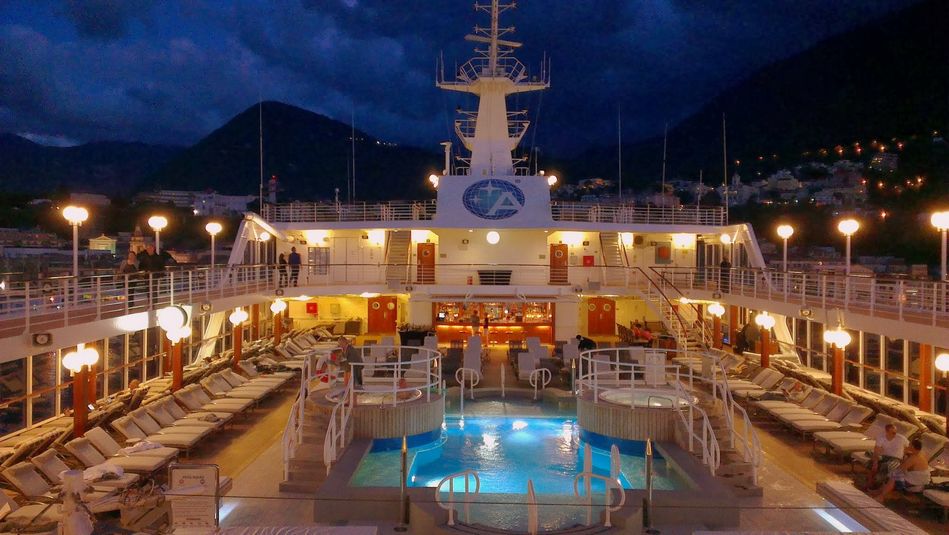 We had arranged to meet some new made friends in the Discoveries Bar for some pre dinner cocktails, situated just outside the main dining room, and I enjoyed a few Appletinis (vodka and apple schnapps) as aperitifs, made by the very charming and bubbly bartender Ruby. We spoke to the maître d and had a table for two, and were soon being escorted to our places. For starters I enjoyed the baked Brie with hot plum sauce, and main course was surf and turf, lobster and sirloin strip - really delicious. We skipped dessert; otherwise we would leave the ship as cargo!