This morning we woke to a beautiful sunny morning, so I had a walk around the top deck before breakfast. Today I decided to try an omelette from the egg station made to order - it certainly set me up for the day. 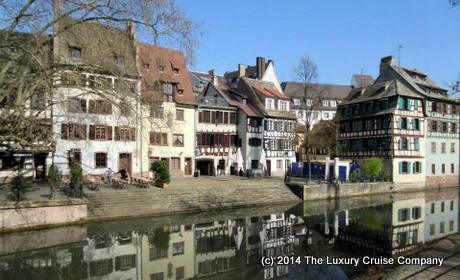 The buses left at 9am for the Strasbourg tour, and we were divided into small groups - ours was about 20 people. We met our guide Patricia and driver Jackie and had a very well presented coach tour. We were told about the famous Storks with about 40 nests along the streets, and Patricia did an excellent job of explaining the Alsace region of which Strasbourg is the capitol. We drove past the European Court of Human Rights, built in the shape of a ship, by our very own Richard Rogers in 1995 and the Council of Europe where 47 members meet to sort out various European issues.

Once in the town centre we started our walking tour passing some fabulous architecture, and our final stop was the spectacular sandstone Gothic Cathedral and the famous and fascinating astronomical clock. 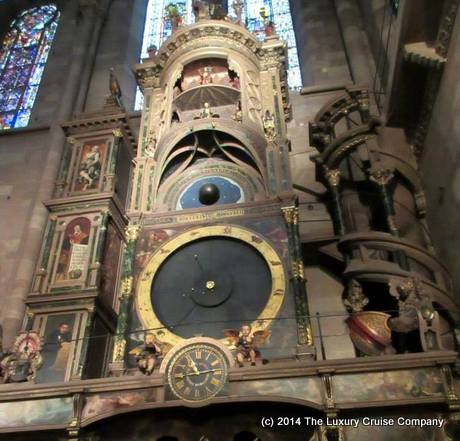 With a medieval cityscape of Rhineland complete with white-and-black timber-framed houses, I particularly enjoyed the Petit France region. The port of Strasbourg is the second largest on the Rhine and in 1988 the city center was made an UNESCO World Heritage site. The tour ended with just over an hour of free time.

APT Luxury River Cruises offer a "Freedom of Choice" tour option; this means that you can choose which excursion to do, and so today there were also tours to Baden Baden or Colmar.

After lunch back on board the MS AmaDante I spent some time with some of the many swans hovering around us in anticipation of a few crumbs!

Dinner was the Captains farewell meal and we were spoilt for choice, I had the Chefs choice which is an option on each menu for the whole meal, a great idea for when it all looks so good that you just cannot decide! Tonight’s Chef’s menu included creamy lobster bisque and a very tender beef fillet, juicy prawns, a selection of vegetables, creamy potato, and finally Baked Alaska was the dessert for which they made a special gluten free one for me.

A local French accordion player Armand accompanied by Muriel, a beautiful singer provided our evening entertainment with "French Chansons". There is always a late night snack available in the lounge but I was so well fed during the day I didn’t explore this option.

I had the most delicious meal on board @UniworldCruises S.S Beatrice river ship. Read my exclusive review for full… https://t.co/XoIpXvVaXi
2 hours ago

Keen golfer? Play a round on your next luxury ocean or river cruise - read our guide here > https://t.co/nqzDYCrppf… https://t.co/V5w4OaryB9
22 hours ago