The Titanic is probably the most famous ship in the world, declared "unsinkable" prior to her maiden voyage, and billed as the largest ship in the world for its time. She sailed 10th April 1912, 100 years ago today. Here are 100 Titanic facts and figures...

1 Gymnasium onboard
1 Photographic darkroom onboard
1 Number of crew who jumped ship in Cobh prior to the crossing (John Coffey)
2 Anchors onboard the ship
2 Number of workers killed building the ship
2 Two dogs survived
2 Number of barber shops onboard
2 Libraries onboard
3 Propellers (2 smaller and 1 main larger one)
3 Number of galleys
4 Number of funnels (one was fake)
4 Number of restaurants onboard
6 The ship received 6 warnings about icebergs prior to the collision
6 Number of days the ship was at sea before sinking
6 Number of places at the Captains Table
9 Number of decks onboard
10 The number of passengers the largest third class cabin could accommodate
13 Number of couples on their honeymoon
15 The weight of each of the anchors, in tonnes
20 Number of lifeboats the ship actually carried
20 Percent of male passengers who survived
23 Titanic’s top speed
24 Percent of Third Class passengers who survived
29 Number of boilers onboard
30 The cost of a third class ticket in US $
35 The draught of the ship
40 Tons of potatoes
42 Percent of Standard Class guests who survived
48 Lifebuoys onboard the ship
61 Percent of First Class guests who survived
64 Number of lifeboats the Titanic could carry
74 It took 74 years to discover the wreck of the Titanic
75 Percent of female passengers who survived
76 Percent of crew who perished
92 Titanic breadth in feet
100 Percent of lookouts who survived
116 The average number of hours the crossing would take by the Lusitania and Mauritania, the Cunard rival ships
137 The anticipated journey time, in hours
159 Number of coal burning furnaces that fuelled the boilers
162 The number of standard class cabins
164 The number of passengers the largest third class dormitory could take
175 The height of the ship in feet
175 Number of Southampton crew who survived
250 Barrels of flour
262 The number of third class cabins
333 Number of bodies recovered from the sea
400 Miles away from the land the Titanic was when the ship hit the iceberg
401 The Yard number of Titanic
416 The number of first class staterooms
492 Number of passengers who survived
550 Number of passengers the First Class restaurant could accommodate
600 Gallons of condensed milk
706 Number of survivors - including crew
724 Number of crew who lived in Southampton
800 The amount of tea onboard, in lbs
800 Bundles of asparagus
825 The amount of coal used per day to keep the ships boilers going, in tonnes
850 Bottles of liquor
882 The length of Titanic in feet
899 Number of crew onboard Titanic
900 The weight of all the passengers and freight onboard Titanic, in tonnes
1,000 Number of bottles of wine taken onboard the ship
1,000 Loaves of bread
1,000 lbs of grapes onboard
1,120 lbs of jam and marmalade
1,500 Gallons of fresh milk
1,750 The cost of a Standard Class ticket in US $
1,908 The year the ship was ordered
2,200 The amount in lbs of coffee
2,223 Number of guests and crew onboard the maiden voyage
2,500 The number in lbs of sausages taken onboard
2,500 lbs of green peas on board
2,890 Distance in mile of the intended trip from Queenstown to New York
3,500 lbs of onions onboard
3,547 Total number of people the Titanic could carry
3,560 Number of lifejackets the Titanic carried
4,350 The cost of a First Class ticket on Titanic in US $
6,000 The amount of butter, in lbs
6,000 The number of artefacts recovered from the wreck ( approx)
7,000 Heads of lettuce onboard
7,500 lbs of ham and bacon taken onboard
8,000 Cigars were taken onboard
10,000 The number of light bulbs onboard
10,000 lbs of sugar
10,000 lbs of cereal
11,000 lbs of fresh fish onboard
13,000 Grapefruits onboard
15,000 Bottles of ale
16,000 Lemons onboard the ship
25,000 lbs of poultry onboard Titanic
29,000 Pieces of glassware
36,000 The number of apples taken onboard
36,000 lbs of oranges on the ship
40,000 The number of fresh eggs onboard
44,000 The amount of cutlery onboard
46,328 The GRT - Gross Registered Tonnage - measure of internal space, not weight
75,000 lbs of fresh meat onboard
131,428 The Titanic’s official number
413,000 The amount in £ of the money raised for the survivors by the Titanic Relief Fund
7,500,000 The costs in US$ of building the Titanic 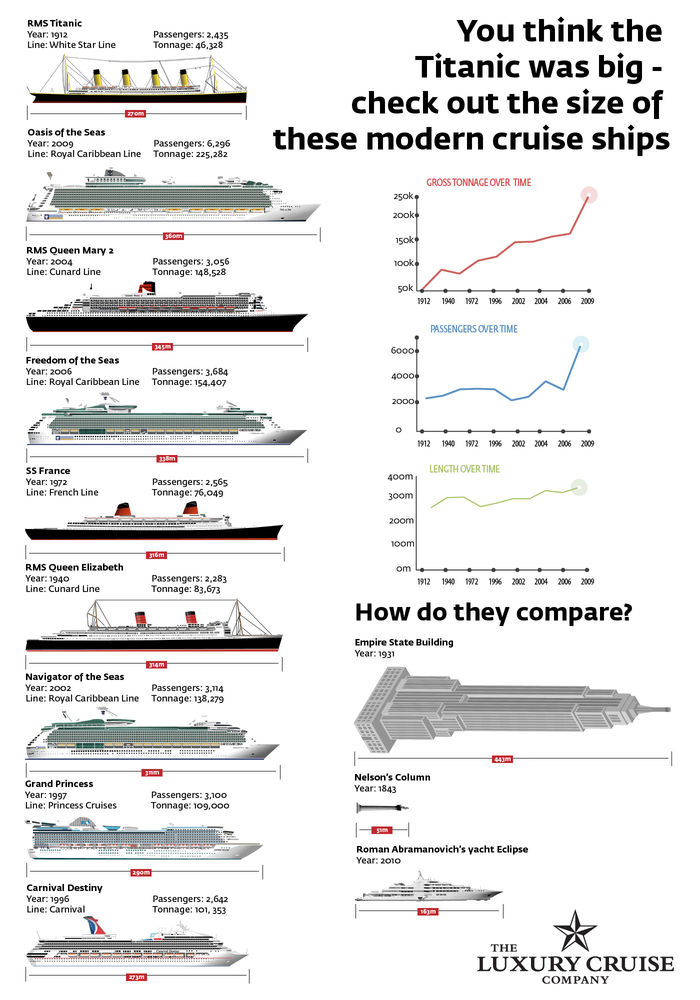 I had the most delicious meal on board @UniworldCruises S.S Beatrice river ship. Read my exclusive review for full… https://t.co/XoIpXvVaXi
2 hours ago

Keen golfer? Play a round on your next luxury ocean or river cruise - read our guide here > https://t.co/nqzDYCrppf… https://t.co/V5w4OaryB9
22 hours ago